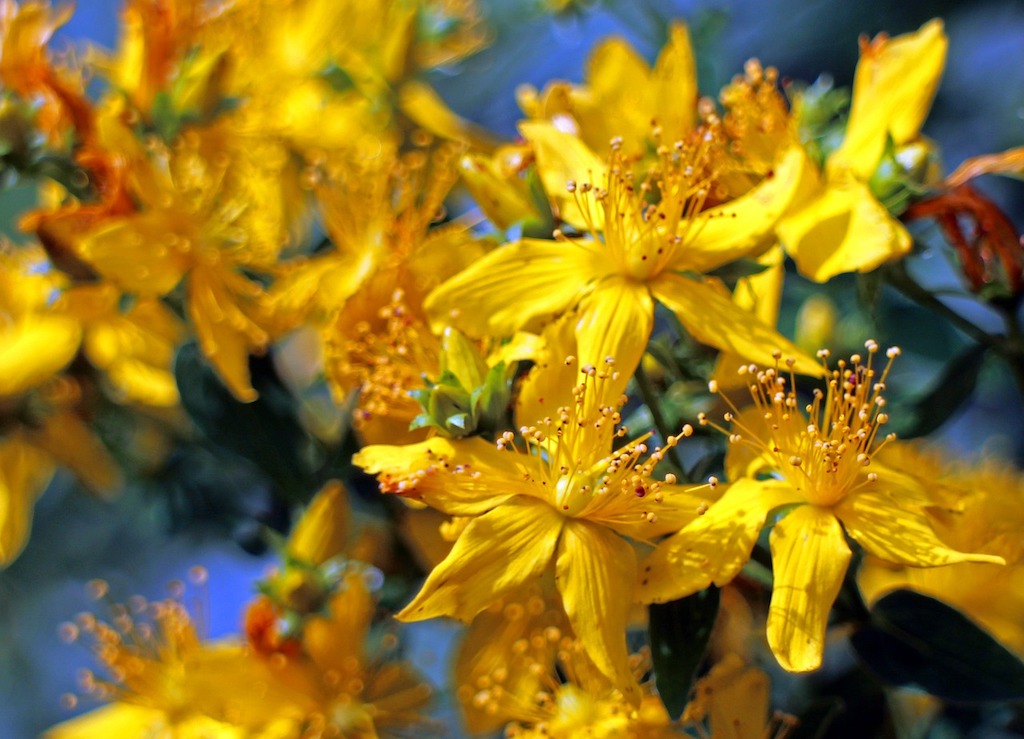 St John’s Wort is the kind of herb that gladdens the heart just by looking at it. Many magical and medicinal properties have been ascribed to it and even its name alludes to certain divine connotations: it was named in honor of St. John, the Baptist, who’s saints day is on June 23rd. He presides over the Christianised version of the Midsummer Feast, the most important feast day of the ancient pastoral calendar. Yet, it is often considered a noxious weed, particularly in agricultural circles. Let’s take a closer look.

St. John’s Wort is a perennial herbaceous plant that can reach a height of up to 2ft. The stem bears two raised lines along their length and branches in the upper parts. The opposite, sessile leaves are ovate to linear and are covered with numerous translucent dots where its essential oil is stored. The margins are entire and show tiny black dots around the edges, the oil glands that produce the red colored oil. The five-petaled, yellow flowers look like little stars or suns. They burst out in clusters that flower from June to September. The tiny seeds are borne in capsules. The taste is aromatic, bitter, balsamic. The flower-bud, when pressed stains red. This is a good way to verify its identity.

St. John’s Wort grows throughout central Europe and the British Isles. Its habitats are verges, meadows, hedgerows, wood clearings, and waste places. It has become naturalized in many parts of the US, where it is regarded as a noxious weed.

The Doctrine of signatures assigns this herb to the Sun, not only because its flowers look so sunny, but also because its flowering-  and gathering season coincides with the zenith of the Sun at Midsummer. At this time its potency is at its peak. The reddish oil has been associated with blood, the sacred juice of life. Saint John’s Wort has long been revered as a magical herb that was said to ward off all kinds of witches and devils and was even often offered as a Midsummer sacrifice to ensure the continuity of life.

Some sprigs were cast on the solstice bonfires, others were blessed and hung above the doors, and into the rafters of stables and barns. This custom was believed to offer protection against the hazards of the burning power of the sun: fires, lightning, and droughts, and to ward off witches and demons.

St John’s Wort enjoyed its greatest glory during the Middle Ages when it was known as ‘Fuga Daemonium’ and it was deemed a protective force against all types of evil.

All efforts of the Church to demonize the herb had failed and so it was absorbed into Christian mythology and given to St. John, the Baptist, who’s Saints Day falls on June 24th, right at the height of the herb’s flowering time. The red oil was said to be a reminder of the Saints martyrdom.

Many of the old Pagan traditions were absorbed into the new faith but reinterpreted to fit its own mythology: It was probably the only herb to have been used in the Witch trials as a means of identifying witches, using talismanic magic:

was written on a piece of paper and placed on a piece of leather along with some St. John’s Wort that had been gathered during the first quarter of the moon. This talisman was supposed to reveal the true identity of a witch since no witch could disguise her identity in the presence of such a forthright and radiant herb. It had the power to banish all evil powers  (Just how it did so is not clear).

Today, St. John’s Wort’s magical associations have largely been forgotten. But it continues to play an important role in medical herbalism, especially as a natural anti-depressant. But not all consider it benevolent. In the US, it is considered a noxious weed that is dangerous to cattle. The allegations are that its photosensitizing properties are hazardous to humans and cattle alike.

St. Johns Wort does have photosensitizing properties. It is most likely to harm grazing animals that may consume great quantities of it while being exposed to intense heat without access to sheltering shade. This problem can be particularly severe in the overgrazed southwestern parts of the US. Internal use of St. Johns Wort herb (rather than potentized pills) rarely poses this threat to humans, (although it is conceivable). It is therefore recommended to avoid St. John’s Wort if one spends a lot of time in the sun or in the solarium.

Caution is also advised when using it in the treatment of depression. St. John’s Wort affects the serum-levels of the Neurotransmitter Serotonin, which may produce negative effects when it is used in conjunction with other anti-depressant drugs that also impact the metabolism of neurotransmitters. Finally, St John’s Wort is a powerful liver cleanser. It cleanses the liver eliminates all kinds of toxins – including pharmaceutical drugs and birth control pills, rendering them useless. Thus it is always advised to consult with a qualified and knowledgeable practitioner who can advise you on any drug interactions or other ill-effects, before attempting to use St. John’s Wort medicinally.

PARTS USED: Aerial parts, collect when in flower, for the oil usually only the flowering tops are used

St. John’s Wort is a tonic for the whole body:  a gentle cleansing remedy that improves overall function and tones the vital organ systems. It improves and regulates the metabolism and tones the stomach, liver, and kidneys, thus helping the body to clear out toxins. Internally, a small amount of the oil or better still, the expressed juice, taken on an empty stomach has been used for treating stomach ulcers and gastritis. Freshly pressed St. John’s Wort juice also has a history of use as an astringent to stop internal bleeding, spitting of blood, and (bloody) diarrhea.

St John’s Wort is also an excellent nervine. Its calming and sedative properties soothe the nerves and alleviate headaches and migraines. It can also be used to treat anxiety, melancholy, and irritability, especially during menopause, or PMT. Old herbals also recommend it for ‘shaking and twitching’ (Parkinson? Epilepsy?). It is considered a specific for curing bedwetting in children, especially when this is due to anxiety. For this purpose, 1 tablespoon of the infusion, given at bedtime, is said to suffice.  As a diuretic, St. John’s Wort assists the kidneys to flush waste materials and toxins from the body. The tea is effective for indigestion, stomach catarrh, and as a vermifuge. For therapeutic purposes, it is best to use the fresh herb or tincture, as the dried herb has lost much of its potency.

In the past, the external use of St. Johns Wort was much more common. It was cherished as an excellent wound healer that could cleanse the wound and ‘knit the skin together’. It was not only applied to wounds and cuts but also to bruises, varicose veins, and burns. For this purpose, the expressed juice, or a compress made from the fresh bruised herb was used. Modern herbalists tend to prefer a diluted tincture. Tabernaemontana reports that the powdered dried herb can be strewn directly into ‘foul’ wounds to clean and heal them. In his days, midwives also used the herb as a fumigant, to help women who encountered severe problems with their pregnancies or during childbirth.

Traditionally, the flowers were steeped in Poppy seed oil to produce a bright red oil. However, since Poppy Seed oil has become very hard to find, Olive oil can be substituted. After gathering the fresh tops, spread them out on a baking sheet and let them wilt for a few days. This will evaporate most of their water content. Fill a jar with the wilted flowering tops and cover with oil. Macerate for 4 weeks in full sun. Strain the oil, repeat the process using the same oil but adding fresh flowers. This oil is used for treating sunburn, other mild burns, neuralgia, sciatica, and rheumatic pain, as well as sprains and strains, cuts, wounds, as well as muscle aches and nerve pains. It is also said to reduce scarring. Tabernaemontana mentions an elaborate recipe for a compound oil, which, among other things, includes various gums and resins, such as frankincense, myrrh, mastic and other herbs, including Plantain leaves, Yarrow and Tormentil, which he claims, will be a superior oil, effective for treating just about any kind wound.

Since St. John’s Wort contains the photosensitizing agent hypericin, avoid direct sunlight after either internal and external use of St. John’s Wort. If you are taking pharmaceutical drugs, especially anti-depressants, consult with a knowledgable doctor regarding the possibility of negative drug interactions. The efficacy of birth control pills can not be taken for granted if St. John’s Wort is used orally at the same time.