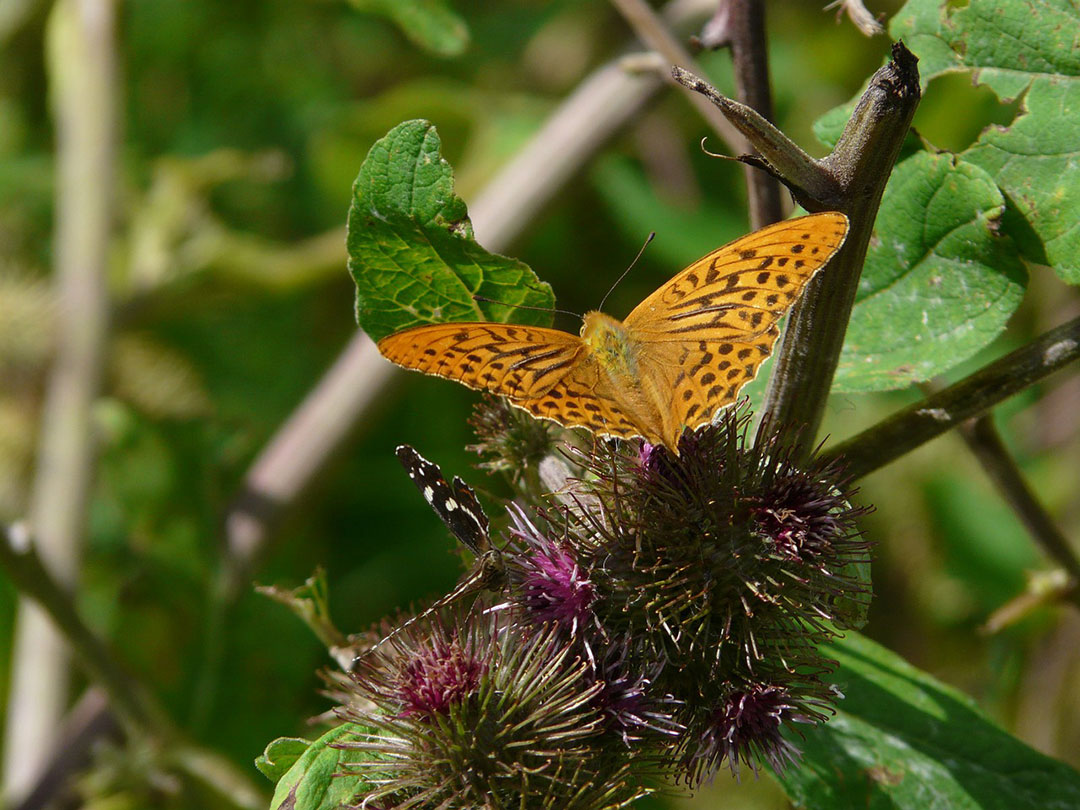 Burdock may not be the prettiest herb, but it is certainly one of the most eye-catching: With its huge heart-shaped leaves that form an impressive rosette during the first year and tall stalk that forms in the second year often reaching a height of more than 5 ft tall, it is hard to overlook this plant. Even if you are oblivious to the plant-life around you, if you have a dog, chances are that you have at least made acquaintance with Burdock seeds. The sticky burs cling to fur by little hooks and are quite difficult to brush out.

Velcro – biomimicry at its best

Ingeniously, Burdock’s burs have inspired the invention of Velcro. The sticky tape has been modeled on Burdock’s hooks. This is a fine example of biomimicry. Nature has invented so many incredible forms to serve all sorts of functions. And she solves such tasks often far better than we could invent.

But this is only one of the amazing properties that this Cinderella plant has to offer. Burdock is rarely welcome in the yard, much less in carefully groomed gardens, despite the fact that bees and butterflies just love it for its generous supply of nectar.

If you keep your eyes open in early spring you will notice Burdock’s leaves first. The huge rosette of heart-shaped, somewhat wavy leaves, sprouts as an expansive rosette that somewhat resemble rhubarb leaves, but grow much more closely to the ground. Burdock is biennial, which means that it does not send up its flowering shoot until the second year.

When to gather Burdock

Foragers diverge in their opinions as to the best time to collect Burdock. Roots are usually collected either in spring or in the autumn. The autumn roots are best as ‘foraged food’. In spring, the vital power has risen into the stalk, leaving the root a bit depleted. However, the actual medicinal compounds are more concentrated in the roots at that time. For foragers, autumn gathered roots and spring /early summer gathered leaf- and flower-bearing stalks are best. Don’t leave it too late lest they get tough.

The leaf stalks can get quite stringy. It is best to peel and cut them and to pull the strings out. They are best in soups, casseroles or pies and give them a flavor that is reminiscent of artichoke when cooked.

The leaves are not used for food. They tend to be coarse, bitter and tough – not exactly enjoyable. The only exceptions are the very young fresh shoots, which appear early in spring. The roots, on the other hand, are delectable, although it requires a determined effort to get them out of the ground. The long taproot needs to be lifted with a digging fork. Once brought to the surface they must be thoroughly cleaned and peeled to cut away the tough, outer skin. The white root flesh itself has a slightly sweetish, nutty flavor that is sometimes compared to Jerusalem Artichokes. The roots are excellent when thinly sliced or pureed. They can be added to stir-fry vegetables or to stews and soups.

Burdock as a healing food

Burdock, like so many of our wild weeds, offers both nutritional and medicinal benefits.

In Japan, Burdock is cultivated and sold as ‘Gobo’ on the market. One can sample it at Japanese Restaurants where it can sometimes be found as a component of sushi rolls or as a side dish.

As a healing food, the root is particularly recommended for those with metabolic syndrome or for people who suffer from diabetes. Burdock root is rich in inulin, a dietary fiber that is not broken down by the small intestines but nourishes beneficial bacteria that populate the colon. Inulin thus acts as a pre-biotic that helps to normalize the intestinal flora and to balance the blood sugar levels.

Burdock as an aphrodisiac

Perhaps the Japanese like it so much because they are in on its secret. Burdock is said to fortify the body, and to give it endurance. This staying power has given it the reputation of having aphrodisiac powers, for which it is highly valued in Japan.

Burdock as a tonic energizer

But Burdock does more than just turbo-charging the libido motor. Its overall action can be described as ‘purifying’. It doesn’t so much add extra energy than remove that which blocks its free flow. Burdock stimulates the metabolic rate. It thereby gently, but persistently activates and tones all the organs of elimination, and induces a process of inner cleansing.

Its energizing quality is hard to describe. Perhaps it is best likened to putting a good, sustaining log on the fire, such as oak or apple. A log that burns slowly and steadily and develops an intense, but even heat, as opposed to e.g. pine, which burns in a flash. Burdock’s energy activates all the functions of the vital organs, thus improving, cleansing and toning the entire body. For this purpose, the fresh root is infinitely more powerful than the dried material.

Burdock as a liver tonic and blood cleanser

In medical herbalism, Burdock root is considered a ‘liver herb’. One of the most important jobs that the liver performs is that of detoxing the blood. Burdock is of great aid in this regard. It is often used to help promote proper elimination which clears toxins from the body. Such toxins are often at the root of skin conditions such as acne, eczema, psoriasis and similar.

Burdock as a wound healer

One of the less well-known powers of Burdock is the fact that it makes an excellent vulnerary. For this purpose, both, the freshly grated roots, or the fresh, mashed leaves can be applied as a poultice to wounds, bruises, and badly healing sores. Simultaneously, an infusion or decoction of the root can be given in order to help the body rid itself of impurities and to facilitate inner cleansing by supporting the liver and the kidneys.  Burdock and Nettle root extracts are made into a hair lotion to prevent the loss of hair.

In the alternative healing community it has long been used for treating cancer.  Various salves and decoctions are on the market, but the best known in this category is a tea known as ‘Essiac’ of which Burdock is a key ingredient.

Recent research has shown that both the seeds and the roots of Burdock have anti-tumor properties. However, Cancer is a serious disease that should be treated by a competent medical professional.

Burdock is said to stimulate hair growth as well as soothe an irritated scalp. One can prepare an easy rinse by making a strong infusion of the bark. Alternatively, the freshly pressed root juice can be blended with oil and applied as a tonic hair pack. But, make sure to lather the hair well before rinsing it all out with water, otherwise, you will end up with an almighty mess. 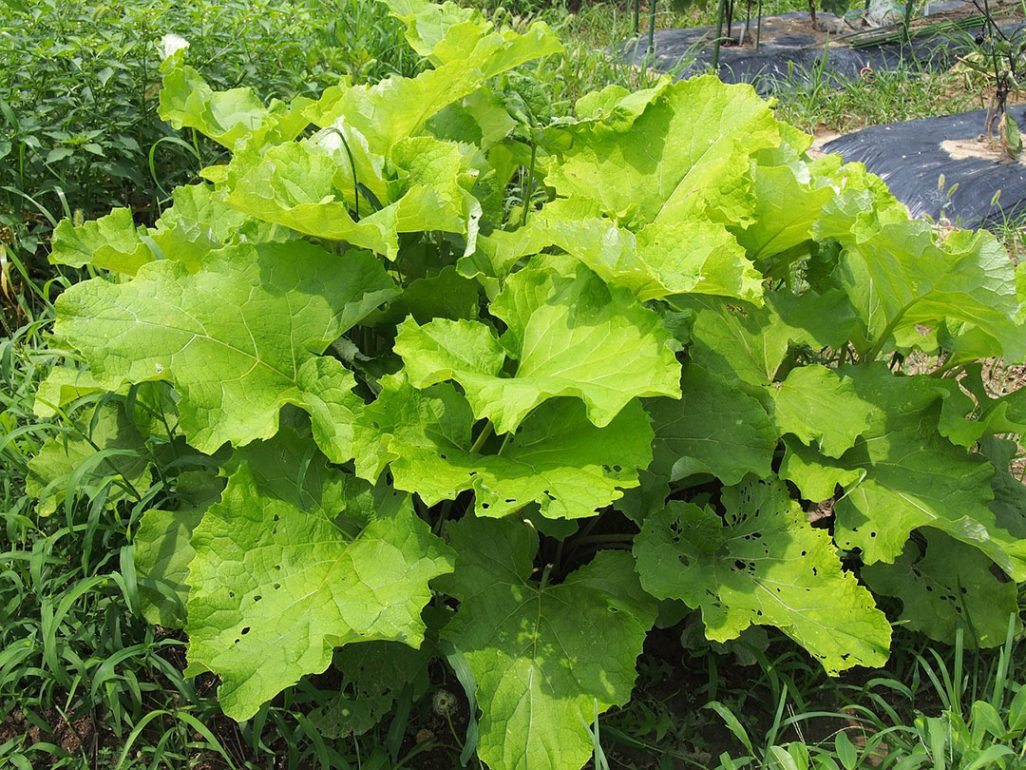 NOTE: Beware that handling the stalks without gloves can stain the hands. Use gloves for picking and preparing.

The leaf stalks of the first year’s growth make a fine vegetable. Cut off the leaves and chop the stalks into smallish chunks. Steam in a little bit of water with some salt and sugar until tender (no longer than 10 minutes). Make a rue with the cooking water and a little butter and some oatmeal. Add some Crème Fraiche, an egg or a little cheese.

The same kind of idea can be modified to make a kind of burdock bake: Prepare some Bulgur wheat and mix with the stir-fried leaf stalks (take care not to overcook the stalks). Make a ‘custard’ with 2 eggs, crème fraîche, a little bit of milk and melting cheese, mix with the Bulgur and burdock and bake in the oven for about 30 minutes. This recipe can be adjusted to taste: add other vegetables, such as onions, sliced carrots and garlic, and season to taste.

Similarly, Burdock stalks can be prepared ‘au gratin’. Leave out the Bulgur wheat and just layer the pre-cooked stalks. Pour a mixture of seasoned eggs and crème fraîche over the stalks and sprinkle with cheddar cheese or similar. Bake in the oven for about 25 minutes.

The leaves are usually a bit bitter and most people don’t like them as a vegetable. However, the young shoots are edible, especially when mixed with other, mild greens, or added to a cheese omelet. They can also be added to soups.

The roots are hard to dig for, but make an excellent root vegetable, which can be roasted, pan-fried, mashed like mashed potatoes or added to soups.

(from ‘The New Herbal’ by Richard Mabey)

Dandelion and Burdock Beer is an old, traditional spring tonic in rural Britain.