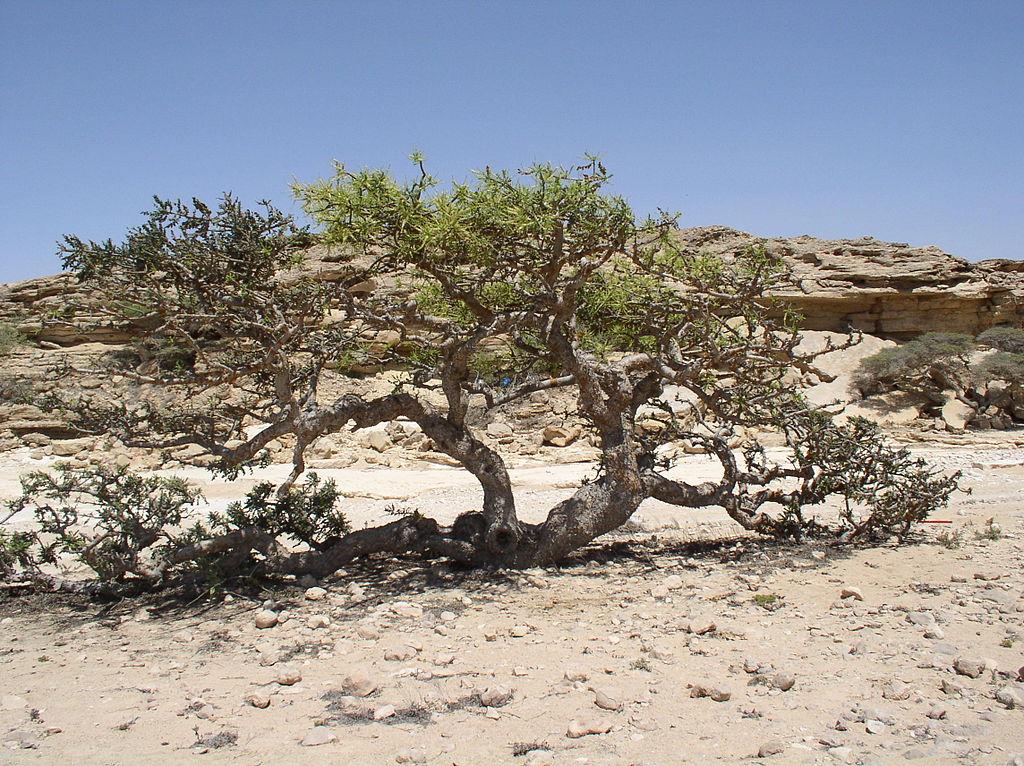 Frankincense is well-known as ‘that stuff that is burnt in church’. But what exactly is it, and where does it come from?

In common parlance, ‘Frankincense’ is often used as a generic term for all kinds of incense, but botanically, it refers to oleoresin sourced from  Boswellia trees.

The Boswellia genus has its greatest distribution in tropical regions of Africa and Asia. It comprises small shrubs or trees that are rich in fragrant oleoresins and well-adapted to arid and inhospitable terrain.

The Biblical Frankincense is derived from Boswellia sacra, a small, shrubby desert tree with pinnate leaflets and thorny branches found in Oman. It lives on rocky slopes and ravines.

In India, Boswellia serrata is the most common variety. It is a more stately tree that usually has divided trunks.

Small, 5-petaled whitish-yellow flowers appear in axillary racemes. The trees frequently seem to be growing directly from the rocks and boulders to which they cling with adaptive, disk-like swellings at the bottom of the trunk. But these adaptations only develop in response to the environment, if necessary.

Excessive harvesting reduces the number of flowers and the size and viability of the seeds. Cattle and camels browse on the leaves and branches, especially in times of drought.

The name ‘Frankincense’ probably came from the old French expression, ‘franc encens’ meaning ‘valuable incense’. Frankincense is also known as ‘Olibanum’, which derives from the Arab word ‘al Luban’, meaning ‘milk’, an allusion to the milky sap that turns into Frankincense when it dries. 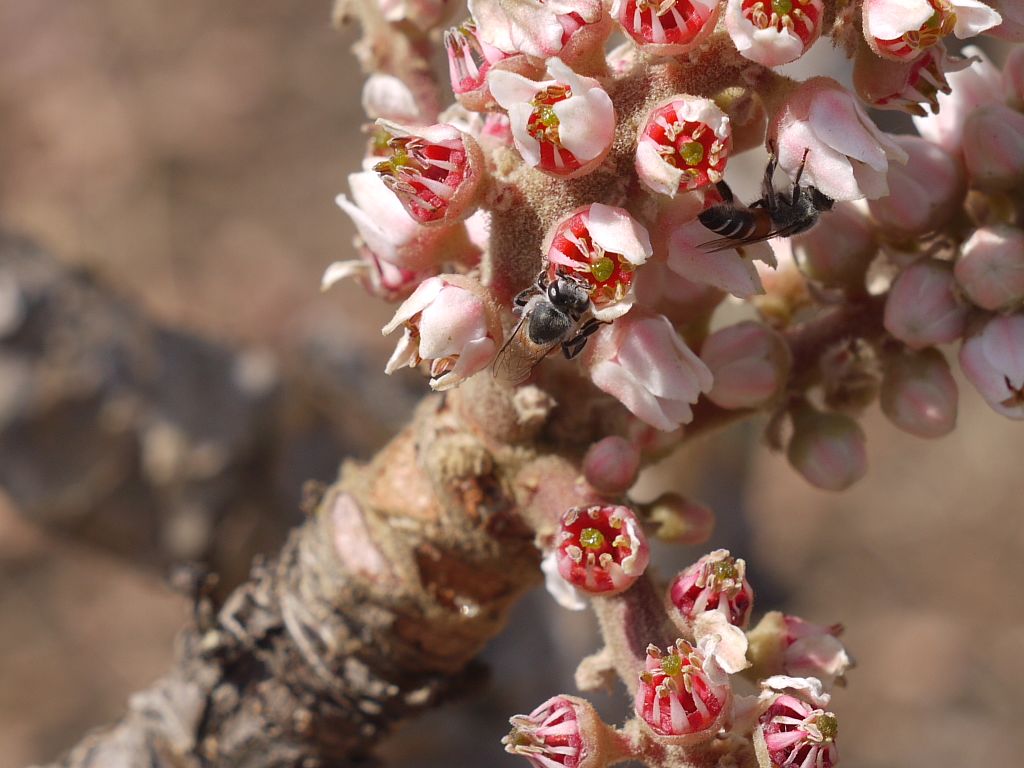 Familiar by name, yet obscure. The source of Frankincense has been shrouded in mystery since long before the birth of Christ. The origins of its use are uncertain, but it is well-documented that Frankincense was widely used in the Egyptian Temples to honour Ra and Horus. On her epic journey, Queen Sheba brought along numerous Frankincense trees as a special gift for King Solomon. Unfortunately, those trees were doomed. Frankincense trees only thrive in arid conditions and are limited to a specific geographic range. But, it’s the thought that counts. The gift was a significant sign of honour and respect.

Incense fuelled the economy of the Arab world, much as oil does today. Towns positioned at strategic locations along spice or incense routes prospered considerably from this trade. In the Ancient World, Frankincense was more valuable than gold. The obscurity of its origin gave rise to wild tales. Frankincense trees were said to be guarded by dragon-like creatures, ready to strike out at any intruder. Keen to protect their fortunes, traders had invented such terrifying stories to deter enterprising and adventurous young men from going off in search of the trees.

But, scare tactics aside, the long journey across the desert was indeed as dangerous as it was lucrative.

Oman, Somalia and Ethiopia are the most important suppliers of Frankincense today. As in the days of Solomon, the most common use of Frankincense is to honour the Gods. While the average annual quantities used have decreased since Solomon’s times, science has found new applications. Harvesting is still done using the traditional method of bleeding wild trees. Although uncultivated, individual trees ‘belong’  to particular families who live nearby (by unspoken agreement). These families look after the trees and claim the right to harvest them.

In the ancient world, all Frankincense trees were considered the property of the King. It fell on him to negotiate the harvesting rights with the merchants, for a percentage of the profits, of course. Studies show that families who take a ‘guardian’ role towards the trees are more likely to use sustainable practices. Unlike the roaming harvesters, who don’t care much about the welfare of a particular tree, any desert dweller will naturally want to protect the source of their livelihood.

Harvesting Frankincense is a time-consuming process. Several deep incisions are cut into the tree trunk, and a small piece of bark is removed. (According to modern research, more than five incisions causes considerable stress to the trees.) This wounding causes the tree to ‘bleed’, and a milky white substance protrudes that seals and heals the wound to prevent infection. After three months, the resin has hardened enough to scrape off the tree trunk. This ‘bleeding’ process is repeated three times to obtain the highest quality Frankincense. Only the resin collected from the final bleeding is rated as ‘superior quality. Once solidified, the resin is sorted into tears and grains of different colours and sizes. The quality is determined by the degree of opacity. Resin destined for distillation is shipped off while still slightly sticky inside. This indicates a high concentration of volatile oil. 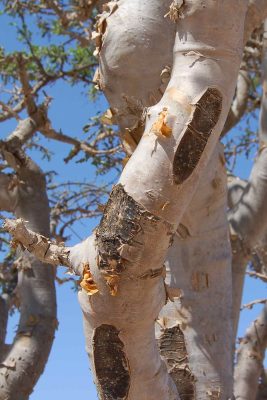 Most Frankincense is used for religious purposes. But it also has a long history as an ingredient of medicines and cosmetic preparations. Early writers such as Pliny, Dioscorides and Avicenna have recorded such uses of Frankincense as were common in their time. But in time, the therapeutic properties had been all but forgotten – until some years ago, when new studies found Frankincense effective for a wide range of hard-to-treat diseases.

The ethnomedicinal applications of Frankincense are very diverse, ranging from dental disease to skin conditions, respiratory complaints and digestive troubles. In the Ancient World, every part of the tree was used: root, bark, bud, flower, fruit and resin and essential oil.

The powdered bark was used to make an astringent paste for swellings (oedema). Mastitis was treated by boiling the dried or fresh gum in the patient’s own milk to form a thick paste for topical application.

The bark’s astringent properties are used in ointments for treating sores and chapped skin. Emperor Nero is said to have used a pomade made from a mixture of resin and wax to disguise the tell-tale bags beneath his eyes that appeared after a night of excess.

The charred, powdered bark was kept as a first aid application for wounds. Mixed with water, it made an instant dressing for injuries and burns. If available, the fresh bark was also used for this purpose. The lotion provides an excellent antiseptic wash to clean dirty or infected wounds.

The bark was also used for setting broken bones. Two pieces of the wood were used as splints, with strips of Frankincense bark wrapped around them to hold in place a bandage that had been soaked in soft resin. The drying resin helped to provide firm support for the mending bone.

Frankincense also played a role in women’s medicine. Chewing the bark alleviates morning sickness. A potion made from snakeskin and resin dissolved in wine was said to ease difficult or prolonged labour. Frankincense was burnt for 40 days during and post-partum, to protect mother and child. Squatting over the smouldering resin was said to restore muscle tone and support healing of any laceration, and speed recovery from the strains of labour.

Its antiseptic properties have also been used to treat ophthalmic diseases. In Ethiopia, the soot of the resin is believed to be beneficial for the eyes. Sore or tired eyes are fumigated with the smoke.

The resin was chewed as a ‘therapeutic chewing gum’ to stimulate the gums and treat dental infections such as gingivitis.

A bark decoction makes a stimulating and cleansing tea. The inner root of young trees was chewed as a remedy for stomach problems. Buds and fruit were used as a cleansing tonic for the digestive system.  A decoction of Frankincense resin, cinnamon and cardamom, settles an upset stomach.

Even the incense was used therapeutically. The smoke acts as an expectorant and clears phlegm from the head and chest. It purifies the air and relaxes the patient while soothing their pain, especially severe headaches.

Frankincense smoke is a powerful insect deterrent, a  property that helps prevent serious diseases like malaria or dengue fever.

Frankincense is said to improve memory and dispel lethargy. An old recipe for an epilepsy treatment recommends boiling it in with hare’s lungs in white wine. 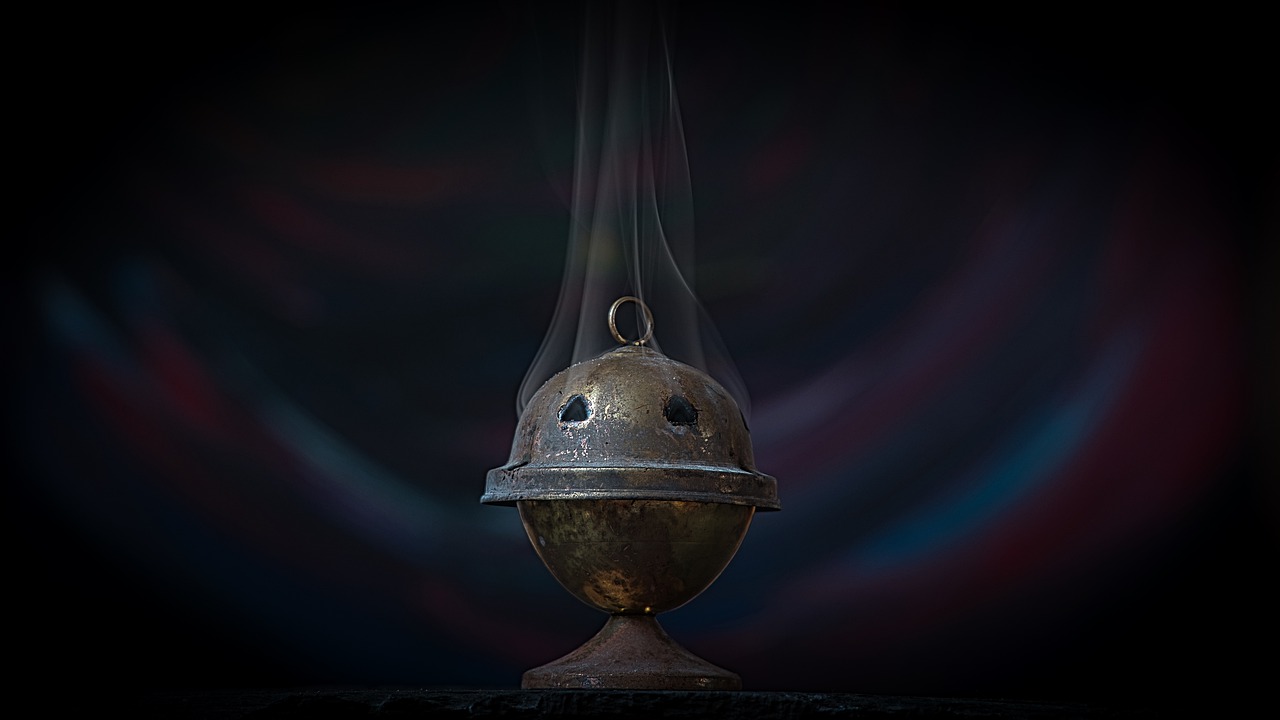 The clean, fresh, balsamic fragrance of Frankincense has perfumed our world since ancient times. Originally, the term ‘to perfume’ derived from the Latin ‘per fume’ meaning ‘to pass something through the smoke’.  Clothes were fumigated, not only to give them a pleasant scent but also to kill any pathogens. Perfuming is essentially a cleansing practice.

The ancient Egyptians were pioneers in cosmetics and perfumery. Among other things, they invented the eyeliner known as Kajal (Khol). Khol was made from charred powdered resin mixed with waxes, oils and other substances. It was believed to protect and improve vision. Modern versions are still available, but no longer contain Frankincense.

Fresh, soft Frankincense resin can be used to seal minor cracks in pottery and other utensils. The gum hardens upon drying.  In combination with other resins, it has been used to caulk ships.

In Ancient Egypt, Frankincense and Myrrh were essential items in the funerary rites used to embalm the mummies in preparation for the afterlife.