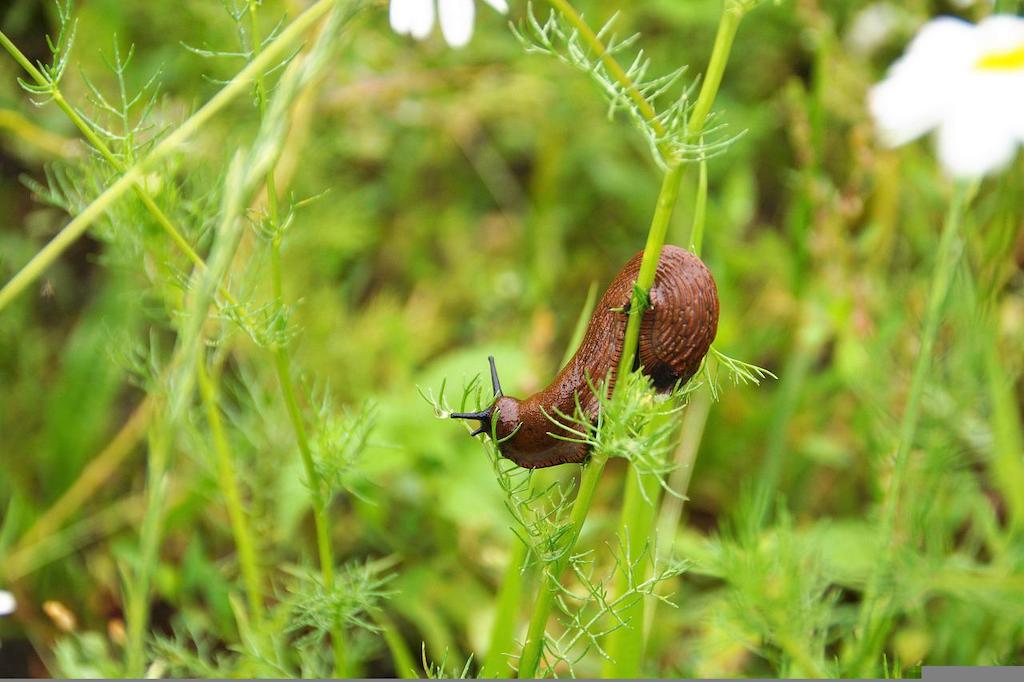 Slugs – the one animal everybody loves to hate. Especially gardeners. These mobile eating machines can really do some damage to our carefully groomed plants. Most gardeners are waging perpetual war against them. But are slugs really as bad as they are made out to be?

Being a gardener myself, I have my share of sluggy-slimy woes. Every evening, at dusk, I go out and search my garden. Torch in one hand and a glass jar in the other, I hunt down those ravenous gastropods before they decimate my beloved seedlings. I scour not my young starts, but the grass as well, to catch the slugs waiting there in ambush. The following day, I release them about a kilometre from my house.

I can’t really tell whether the strategy is working. Every evening I collect roughly the same amount of slugs again. Where the heck do they come from? Nature’s slug supply seems inexhaustible – as if on tap.

But the other day, while on my daily slug patrol, it occurred to me that I actually know very little about these creatures. Quite shocking, considering that I have hand-picked about a million of them over the years.

‘Okay’, you might think, ‘what’s the big deal? What is there worth knowing about slugs, except how to get rid of them?’

Good question, and I had always thought along similar lines. But, as with everything in life, things become interesting the minute you invest interest in them. Before I knew it, I was going down a research slug-hole, discovering weird and wonderful facts about these strange creatures.
I watched way too many slug videos on YouTube and scoured the internet for gastropod-related papers and posts. To my growing amazement, slugs turned out to be far more interesting than I had ever imagined.

People, who study slugs, seem to be a special kind of nerdy and have a sense of humour, too. Just consider the term ‘gastropods’, the scientific term for all slugs and snails. There couldn’t be a better name for them. ‘Gastro’ means ‘stomach’, and ‘pod’ means foot. I can’t think of a more perfect way, to sum up what slugs and snails are all about.

The English word ‘slug’ is similarly general. There are gazillion species of slugs and snails. Currently, an estimated 65,000 to 80,000 different species exist, and they have managed to adapt to all kinds of habitats – even the desert!
In terms of evolutionary success stories, slugs are champions. Their family tree dates back to 495 million years ago, the late Cambrian period, when more complex life forms first evolved.  There are 721 known families of gastropods, of which only 245 have gone extinct. The others are still with us today – a remarkable feat in evolutionary terms. To put that into perspective, the class of primates, to which we belong, only emerged about 74 million years ago. (Homo sapiens has only been around for 300,000 odd years)

The very earliest slugs evolved in the ocean – like all life at that time. Sea slugs are truly stunning. If you have never seen them, do go ahead and check them out. They are out of this world! My current favourite is this cutie:

The sea-sheep dons a coat of leaf-like structures with which it can perform photosynthesis! But it did not learn the trick itself. Like corals, it acquired the ability by eating algae, which it integrates into its own body. Other species of sea slugs obtain toxins in the same way, which gives them a means of protection.

Our garden varieties of land slugs are neither as colourful nor as cute. But even so, they are much more interesting than we give them credit for.

Interestingly, the thousands of species of terrestrial slugs are not all closely related. It seems that slugs originally did have shells, but later lost them. Now all that remains is a vestigial ‘shield’, a kind of plate on their backs that they retreat into when they sense danger.

These squishy, slimy, globs of goo are incredibly vulnerable, yet that does not impede their survival. Their defence system is their slime.

Slugs produce two distinct types of slime. A thin one that oozes from the centre of their foot helps them glide and marks their trails. It guides them back home to their holes and also signals their presence to other slugs – which comes in handy when trying to attract a mate.

The other type of slime is produced from glands at the rear and front of their bodies. It is extremely thick and sticky, which makes it more difficult for predators to just pick them up. The slug simply glues itself to the spot. The slime is also distasteful to potential predators, such as badgers, thrushes and hedgehogs.

The slime plays a prominent role during mating, which for slugs is a very oozy affair. The interesting-looking keel-back slugs spin a slime thread from which both slugs suspend themselves during the act. Slugs are hermaphroditic, and thus have both male and female sexual organs. Both will give and receive sperm, potentially doubling the number of offspring.

You can watch their weird and wonderful love ritual here, courtesy of the incomparable Sir David Attenborough and the BBC. Thank you, Sir, you made my day!

Slug slime has also recently caught the attention of scientists, who have taken an interest in its properties. Slug slime is highly adhesive yet elastic and does not become brittle. It is also non-toxic, consisting of mucous and serotonin. The unique property of maintaining its adhesive powers, even on wet surfaces, makes it a promising candidate for a new type of non-toxic surgical glue.

In Britain, there are 40 species of slugs, but only about 8 of them do all the damage in the veggie patch. These little ‘mobile stomachs’ have a ravenous appetite, yet their evolutionary role is not specifically to destroy our gardens. We simply make it easy for them to access the juiciest, tenderest, and tastiest young plants. From a slug’s point of view, our gardens are a kind of Shangri-la.

Ecologically, slugs are important composters that help break down organic debris, and themselves morsels in the food chain, even if not very tasty ones.

Snails even form part of the human diet. I used to love them as a kid, until one day I got really, really sick on them. Slugs, however, only enter the human food chain accidentally by hiding in the lettuce and avoiding being washed off – due to their sticky slime. Slugs carry parasites, so the principle of ‘if you can’t beat it, eat it’, is not recommended, in this case.

But you are probably still asking yourself the one question we all want to know the answer to – how do you get rid of slugs?

To tell you the truth, I haven’t found the magic secret, but there are some methods that are somewhat successful.

Copper tape
Garden shops sell copper tape that supposedly deters slugs. Apparently, the slime reacts with the copper, giving them a little electric shock. I haven’t tried this method, so I can’t comment on it.

I have tried coffee grinds, eggshells, and dry grass cuttings as mulch.

A determined slug will not be put off by any of these, but is likely to look for a more readily available meal. I often leave bits of decaying plant matter lying around when I pluck weeds from my veggie beds, and I have watched slugs devour these. But, like beer traps, it might attract more slugs to the garden. Other gardeners insist that keeping a garden tidy is the way to get rid of slugs.

I have also noticed that slugs can smell a wilting plant, which they go for preferentially.

Sometimes, I leave things like chenopodium standing between my tomatoes. Slugs prefer this tender weed to the tomato plants, especially once the tomatoes are strong enough to create their own defence.

Eggshells, walnut shells, pine needles, and other prickly stuff deter them, to some degree.

Slugs shelter in dark, moist places, under bricks, tarps, and buckets or under planks that some gardeners put down as walkways between their rows of veggies. If you check these places before the slugs go for their forage, you can find a whole clutch of them without much effort.

Whatever you do, please don’t use toxic chemicals. They do kill the slugs, but also the birds and hedgehogs that either eat the slug or the pellets.

Even though we may not like slugs much, they do have a place in the ecosystem. Eliminating them would probably cause more harm than good. But only a few species are truly destructive. Most simply go about their business, or even feed on other slugs and their eggs. Slugs can’t help being born as slugs, any more than we can help be humans. We each have our niche but share an inherent right to exist on our amazing planet, which provides for both, humans and slugs. Slugs have been here a lot longer than we have, and managed to survive without totally decimating their ecosystem, despite their ferocious appetites. Judging by how our own insatiable appetite decimates nature, slugs will probably outlast us.