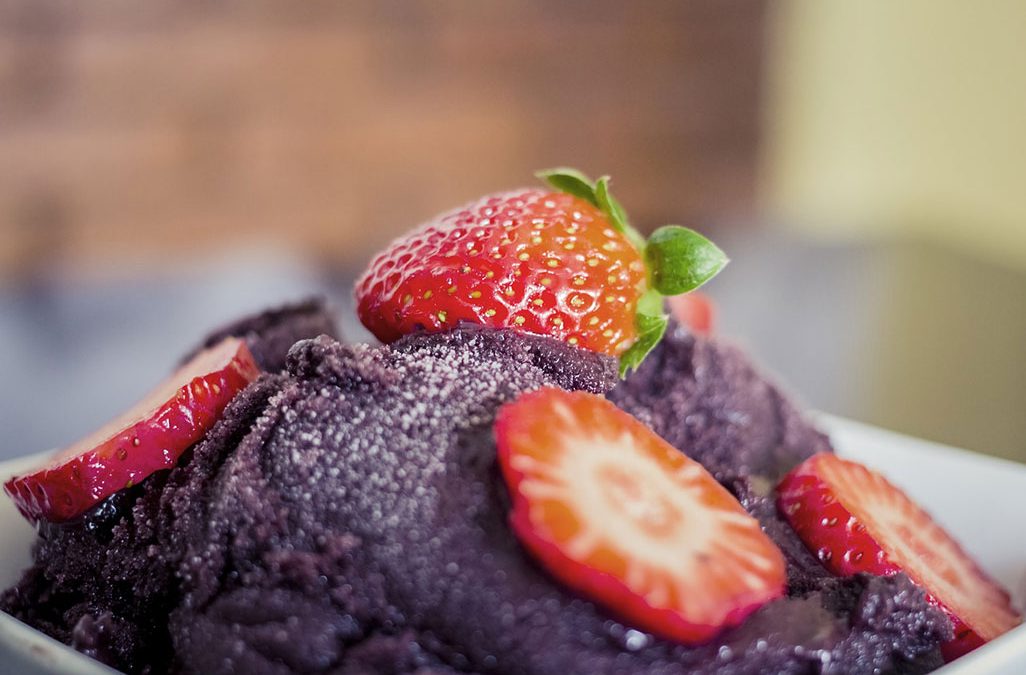 A slender, graceful palm of the Arecaceae family, Açai is native to the seasonally inundated lowland forests of eastern South America, especially Brazil. Several stems sprout from its base and it can grow to about 15-25m high. It takes 4-5 years to mature. The roots are perfectly adapted to the seasonally inundated and waterlogged conditions of its habitat, by developing special root structures known as pneumatophores, better known as aerial roots, although some prefer to call them aerating roots. These vertically erect, pencil-like shoots grow from the submerged horizontal roots that are below the soil. They not only help to stabilize the plant and protect the soil from erosion, but also help the roots to obtain oxygen as they will be exposed to the ground above the mud or flooded ground.

The leaves of the Açai palm are typical, pinnate palm fronds that arise from a reddish . In the course of a year, it produces 4-8 bunches of fruit, with yields being heaviest during the dry season, and most flowering mostly occurring during the wet season. The fruits form bunches of small, purple-black drupes, each with a large stone in its center and a minimal covering of purple-red pulp. Bunches can weigh up to 6kg each. The fruits are an important food source for rodents and birds, thus helping to spread the seeds. Thanks to its general usefulness this palm is often planted near human habitations.

Açai juice and smoothies are all the among health-conscious consumers in the US. But in the Amazon it has long been a staple – it is so ubiquitous and consumed in such large quantities, especially among the indigenous people and ribereños, the river communities of the lowland rainforest, that it is often referred to as ‘poor man’s food’.

Recently its superfood properties have been hailed, and successfully marketed to the young fitness crowd. Amazing qualities are ascribed to it – like most superfoods it is said to improve everything from the tone of your skin to your sex drive and have anti-cancer properties, too. No wonder it sells like hotcakes. If you google Açai you will instantly get a return of 5 million (!) pages – mostly advertising some novel product based on the magic berry. There is no end to the hype. But is it really true? Searching for solid evidence that is based on actual studies, one is baffled to find – precious little. There has been almost no research on this fruit at all. The hype appears to mostly be marketing froth. A new food fad is born.

Not that the fruit is bad for you, far from it. It does indeed have quite an impressive amount of anthocyanin, the antioxidant substance that gives it its – the same compound that achieves this effect in Bilberries. The actual amount of this substance is said to be twice as high in Açai than in blueberries, which does seem impressive. However, it comes in a very unstable form, which rapidly deteriorates after picking. The berries also contain protein, calcium, Vitamin B1, A, and E, as well as a good amount of calories – but despite the superlative claims its overall profile is not that remarkable. In the Amazon, although widely popular as a food/drink stuff, the berry has never been used medicinally.

One of the most common ways to consume it is as a kind of porridge. The berries are soaked in water in order to soften the outer skin so that the pulp can easily be separated from the seed. The resulting mash is a deep purple, shiny thick mass, which may be mixed with the pulp of manioc, a starchy vegetable, to make a filling porridge. The mash is also frequently eaten with granola and other fruits as an energizing ‘health food’. Or, it is diluted with water or other fruit juices to make the famous energy drink that has recently become so popular among urbanites throughout the Americas.

The rapid nutrient deterioration is not of great concern in the Amazon, where it is eaten pretty much right from the tree. But to preserve any of its potential benefits for consumers on the other side of the planet, it is necessary to preserve the fruit pulp for export. The usual method is to pasteurize it, which, however, is not terribly gentle and destroys some of the more fragile compounds. It is then frozen or freeze-dried, which further reduces any potential benefits. Thus, it seems like Brazilians are reaping most of the benefit, providing the juice is made in clean condition with clean water and equipment, compared to the processed derivatives found in juice bars or on supermarket shelves thousands of miles from the Amazon.

But business is booming. Dietary crazes have a way of catching on that defies any rationality. In Belem, the main market town in the middle of the Brazilian Amazon has an area solely dedicated to the sale of Açai berries, known as ‘Feira do Açai’, where more than 100 vendors sell 200,000kg of berries PER DAY during the dry season. And there is of substantially increasing business by planting more Açai trees. (One project plans to plant 5 billion Açai trees over the next 10 years!)

Açai is also economically important for other reasons. It is currently the main source of palm hearts, locally known as ‘‘, which is part of the traditional Amazonian diet, although not significant from a nutritional point of view. Palm hearts also have a sizeable export market, mostly in France. Originally Açai’s cousin ‘Euterpe ‘ was harvested to obtain the hearts, but since it only grows one stem and the tree has to be cut and killed in order to obtain the precious ‘heart’ harvest from this species proved highly unsustainable. Euterpe oleracea, on the other hand, produces several stems and cutting one or two encourages the growth of new shoots. Thus, Euterpe oleracea has now largely replaced E. as a source of palm hearts.

The species is also important as a source of palm fronds, which are used for thatching roofs. A secondary product derived from Açai that plays an even greater role is unlikely to ever become a hit abroad – even though it is deemed a delicacy in the Amazon: the grubs of the palm beetle (Rhynchophorus palm beetle), which although highly nutritious and rich in protein is unlikely to win much in any of the superfood markets abroad. To encourage the beetle the cut-down stumps of Açai are urinated on, which apparently creates an ideal environment for the beetle to lay its eggs. A few weeks later 3-4 pounds of nice, fat beetle grub larvae are harvested and consumed with relish.

Some environmentalists welcome the growing popularity of Açai, as they see it as a sustainable non-timber forest product that can be successfully marketed to bring much needed economic benefits to forest and river-dwelling communities without threatening the forest. However, whether the production will, in fact, be sustainable in the long run remains to be seen. The habitat of this palm is limited to riverine locations and although it occurs naturally and prolifically, forming extensive groves, it is not clear where plantations will be established. Will established forest have to be cleared in order to grow this superfood for export, or will existing soy fields be converted to Açai? Also, as yet there is little evidence that sustainable management and harvesting methods actually much employed. Instead, palm heart harvesting is still often done by clear-cutting large areas instead of just taking out individual trunks. There is some hope that Açai berries will eventually far outweigh the market for palm hearts, in terms of their economic importance, but it looks as though there will always be a market for them, both locally and abroad.

As for the current Açai craze – it is doubtful that it will last. Marketing buffs are very good at creating a buzz – preferably by throwing some sex into the marketing spin. The technique is not a new one. Even tobacco was once hyped and marketed along the very same lines. That particular craze had a long-lasting effect, mainly thanks to the addictive nature of tobacco, but exotic fruit crazes come and go – noni, mangosteen, kiwi – they all were once perceived as nutritional miracle bombs. No doubt they have their virtues, but are they really worth the money that millions of consumers are prepared to pay for the promise of ‘youth in a bottle’? Personally, I would prefer the local heroes – wild blueberries for example, fresh from the bush, no processing required and all nutritional benefits intact.

1-4% protein, 7-11% fats, 25% sugar, 0.05% calcium, 0.033% phosphorous, and 0.0009% iron. It also has some , traces of vitamin B1 and some vitamin A and E. It also delivers 88 to 265 calories per 100 grams, depending on the preparation method. In addition to the standard vitamins and minerals found in most fruits, the main plant chemicals in Açai fruit include epicatechin, p- acid, gallic acid, (+)-catechin, protocatechuic acid, ellagic acid, p-coumaric acid, ferulic acid, vanillic acid, cyanidin, and 3-glucoside. (source: rain-tree database)

In Brazil the oil of the fruit is obtained and used to treat diarrhea; a decoction of the roots is considered beneficial in cases of jaundice and boosts blood production. The grated fruit rind is infused to make a wash for skin ulcers, and the seeds are crushed and prepared as an infusion for treating fevers. In the Peruvian Amazon, an infusion of the crushed, toasted seeds is used to ally fevers, and a decoction of the root is used for malaria, diabetes, hepatitis and jaundice, hair loss, hemorrhages, liver and kidney diseases, menstrual pain, and muscle pain. (source: rain-tree)