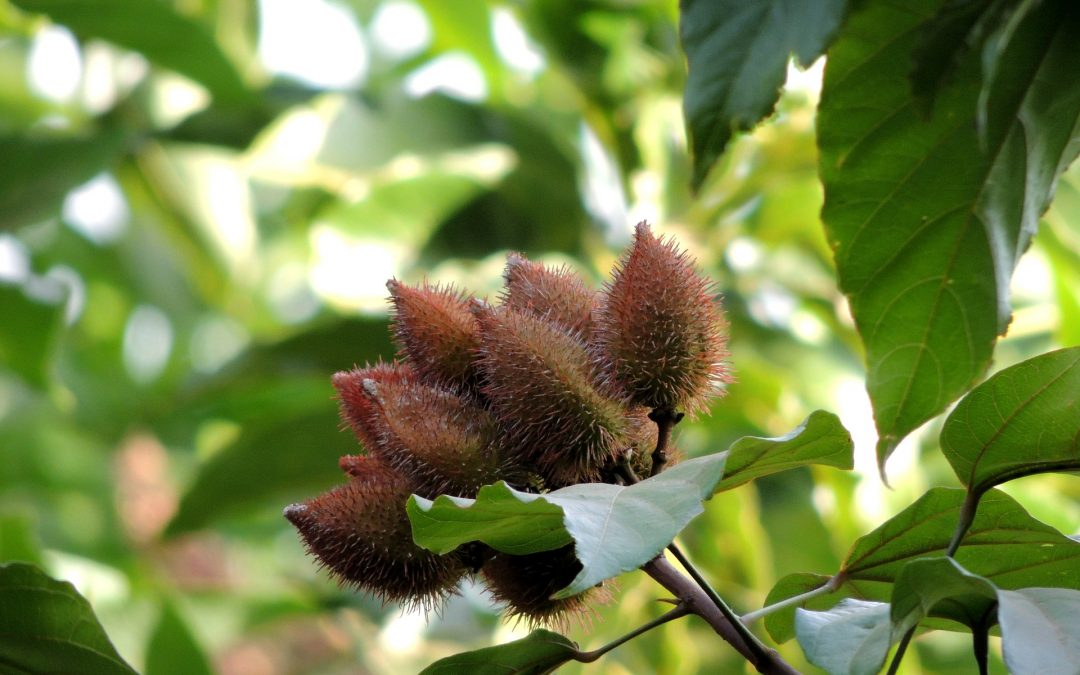 Annatto, or Achiote, as it is commonly called in Latin American countries, is a tropical shrub that can grow up to about 20 meters high. The pinkish-white flowers develop into a bright red, heart-shaped and exceedingly bristly fruit, which is inedible. When ripe the fruit capsule breaks open and reveals an abundance of seeds embedded in an orange-red pulp. Achiote produces a prolific amount of fruits: a single tree can yield up to 270kg.

Annatto is widespread throughout tropical regions of Central and South America, where it is native. It has also become naturalized in other tropical regions, such as the Philippines.

The Latin name ‘Bixa orellana’ does not give much of a clue regarding its properties. Some believe that the genus name is derived from the Portuguese ‘biche’, meaning ‘beak’, which may allude to the beak-shaped seedpods. Others believe it is a phonetic rendering of a Carib word for the colour red, which makes more sense. The species name is far more straightforward – it is given in honour of Francisco de Orellano, a Spanish conquistador of the 16th century, who accidentally ‘discovered’ the Amazon.

The tree has a wide range of surprising uses that are mostly of local significance. Although Annatto fruits are inedible, the fruit pulp yields a bright red dye, which has a long history of use, both as body paint and as a dye for textiles or food. The ancient Mayas and Aztecs regarded it as a symbolic substitute for blood and thus held it sacred. It was also used to make ink. Virtually all ancient Mayan scriptures were penned in annatto juice. Indigenous people still use the pulp for ‘cosmetic purposes’, as hair dye or lipstick, hence the English common name ‘Lipstick tree’. The pulp is also said to repel insects and to protect against sunburn due to the UV-filtering properties of the carotenoid pigment known as Bixin. 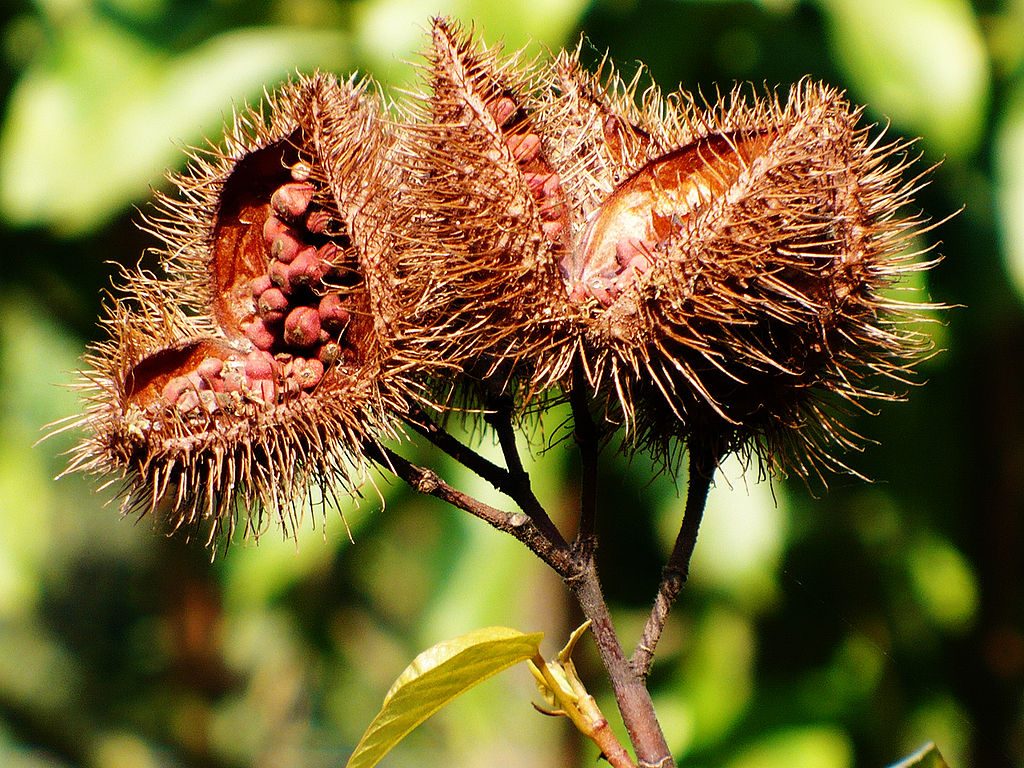 Its use as a food dye is just as ancient and persists even today. In fact, it is probably one of the most ubiquitous of all food dyes used by the food industry. It lends its reddish tint to cheeses, butter, and spreads, candy, and custards. It is also still used as a traditional food dye for meats. (The bright red colour of Chinese poultry, however, is due to treatment with a caramelised malt solution.) This use is most prevalent in the Philippines and in Central America and Mexico. The Aztecs were known to add Annatto to their sacred xocolatl brew and other foods.

To process the fruits, the seed pods are washed in order to separate the pulp from the seeds, which are used separately as a mild spice. A spice paste, known as ‘Achiote Recado,’ is a popular flavouring in Yucatecan cuisine (southern Mexico). Meats are marinated in the paste and wrapped in banana leaves. Fish, chicken and especially pork, or suckling pig can be treated this way.

Annatto is one of the most widely used food colouring substances of the food industry, which is somewhat problematic as many people appear to be highly allergic to. There are campaigns to get it banned, but the FDA considers it exempt from regulation. The way in which commercial annatto is processed as a dye involves hexane extraction, which just may possibly have something to do with these reported allergic reactions. Furthermore, the colouring agent, known as Bixin can now be produced by bio-engineering. Scientists have figured out the biochemical pathway and manipulated E.coli bacteria to produce Bixin. It might be interesting to conduct a comparative study of a) completely naturally processed annatto (see recado recipe below), bio-engineered bixin or commercially extracted annatto dye. 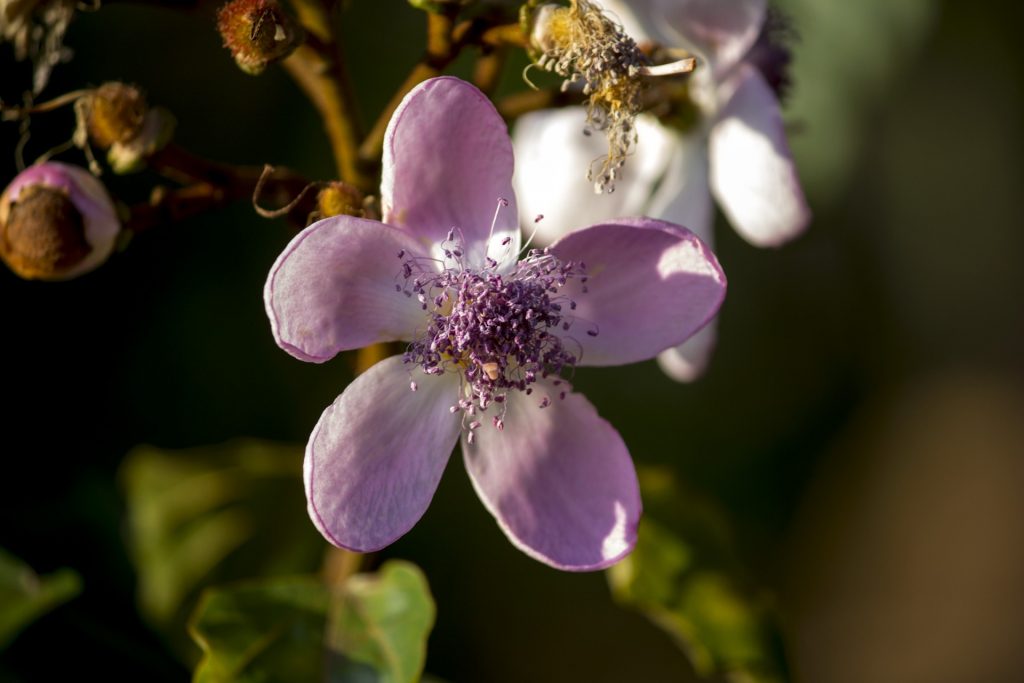 Although commercially only the seed and seed paste are available, in tropical regions where Annatto is grown, other parts of the plant are also used for medicine. Particularly the leaves have a wide range of applications. The shoots and young leaves are used for feverish infections including gonorrhea, dysentery, and hepatitis. They are believed to protect the liver and reduce cholesterol. The leaves and seeds are also used to soothe irritable indigestion caused by excessively spicy food. An infusion of the flowers is said to be a useful expectorant for newborn babies. In some parts of the Amazon Annatto is used as a treatment for snakebites. Internally it is given as an anti-parasitic that can reduce pain associated with intestinal parasites. Externally the seed extract is applied as an insect repellent and to protect the skin against the ultraviolet rays of the sun. It is also used as a general skin tonic and to heal skin conditions.

The leaves have a marked effect on the urinary system. They increase the volume of urine in cases of renal insufficiency or cystitis. They are also said to reduce benign prostate hyperplasia and are thought to have anti-tumor activity. These are believed to be due to the high antioxidant activity of the carotenoid compounds Bixin and Norbixin, which are also the source of the red pigment Annatto is known for. These carotenoids have also been found to lower blood sugar levels and are used in the treatment of diabetes in traditional medicine systems of the tropics.

To obtain an orange-yellow food dye simply heat some cooking oil and stir in some annatto seeds. Remove the seeds from the oil before adding other foods for stir-frying. While the seeds would not spoil the taste, they would not add much flavour either. For flavouring, they are best when processed as a recado paste – see below:

‘Achiote recado’ is a typical spice paste of southern Mexico that is used to marinade meats, poultry, and fish. This recipe is based on a traditional recado recipe that utilizes the juice of bitter oranges (Seville oranges). As these are difficult to get this version is an improvisation.  A ready-made product is available at most Mexican stores. Making it from scratch takes time and effort, but, one can taste the difference

In a small saucepan combine the annatto seeds and water. Bring to a boil, cover and simmer for 30 minutes. Take off the heat and allow to steep for 2 more hours or until soft. Discard excess water, place in a food processor along with the remaining ingredients. Whizz until smooth. Use immediately or cover tightly. It will keep in the fridge for about 5 days.