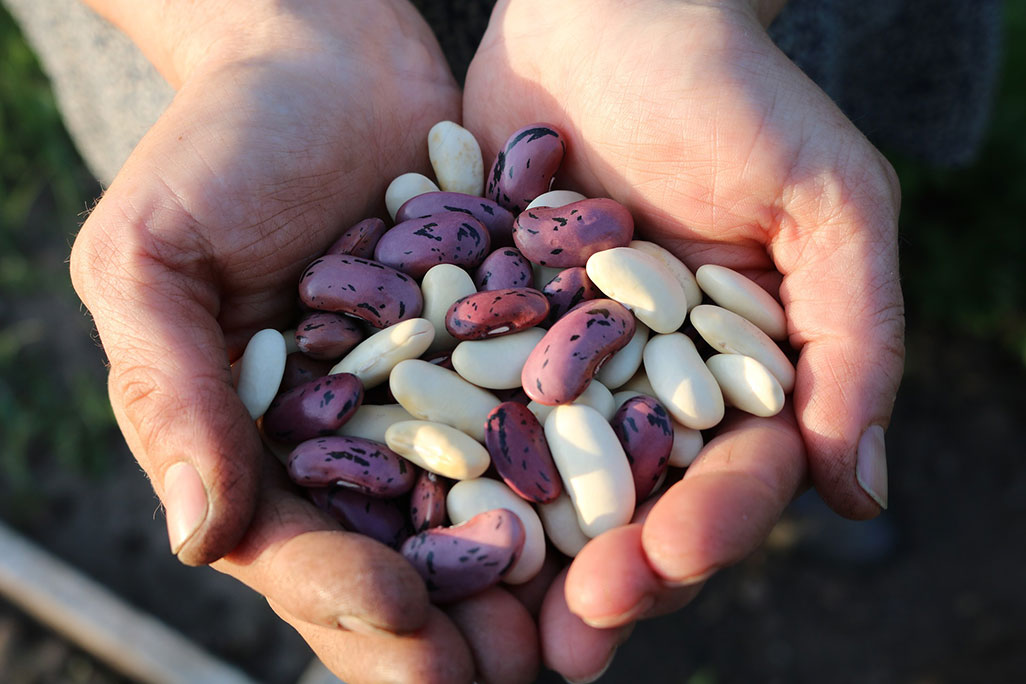 Beans belong to one of the most widespread and diverse botanical families, known as the Fabaceae, or Leguminosae. They occur throughout the world as bushes, herbaceous shrubs, herbs, and trees. It is estimated that there are about 619 genera with about 18815 species (depending on who’s authority you accept). Of course, not all members of this large family are edible, but many are used in one way or another, as food, for medicine, as a dye, or for their oil. As a further boon, these plants are able to fix nitrogen in the soil (with the help of bacteria). This atmospheric gas is extremely important for plant life, but they can only absorb it from the soil.

Edible members of this huge family come in an infinite variety of colours, shapes, and sizes: peanuts, carob, lentils, chickpeas, green and yellow peas, kidney beans, runner beans, broad beans, black beans, mung beans – and, economically probably the most important of them all: the soybean.

Pulses, such as peas, chickpeas, and lentils are some of the oldest domesticated plant species. According to the archeological record, the history of their cultivation both in the Old and in the New World goes back 5000 – 6000 years (some claim even earlier dates).

Of special importance are the genera Vigna (Old World) and Phaseolus (New World). They have become so well adapted to our needs that they have lost the ability to disperse their seeds naturally. Originally, seedpods evolved to ‘explode’ upon ripening and drying. But if you have ever grown peas or beans, you will have noticed that modern varieties no longer do this. This is convenient for us but means that the plant/human relationship has become so tight that these species have become completely dependent on us for their survival.

What makes the pulses so important  as a food is their high protein content. Plenty of plants provide carbohydrates in the form of sugars or starch, but few provide protein in useful quantities. In regions of the world where other sources of protein such as meat or fish are not easily available, or are not used on religious or ethical grounds, pulses fill the gap. In combination with a staple, such as wheat, corn or rice, beans provide practically all our protein requirements.

But, because they are seen as a ‘lower value’ protein compared to meat, they have been stigmatized as ‘peasant food’. While the rich can afford to feast on meat, peasants have to make do with beans and rice. Another reason why they are not welcome in polite company is their ‘musical’ (and smelly) note. Interestingly, green beans are innocent of this effect and do not suffer the same kind of disapproval. Au contraire! They are much sought after in haute cuisine, while in ‘ethnic’ cuisines, rice and beans, refried beans, dhal, black-eyed beans, etc. feature as ‘soul-food’. 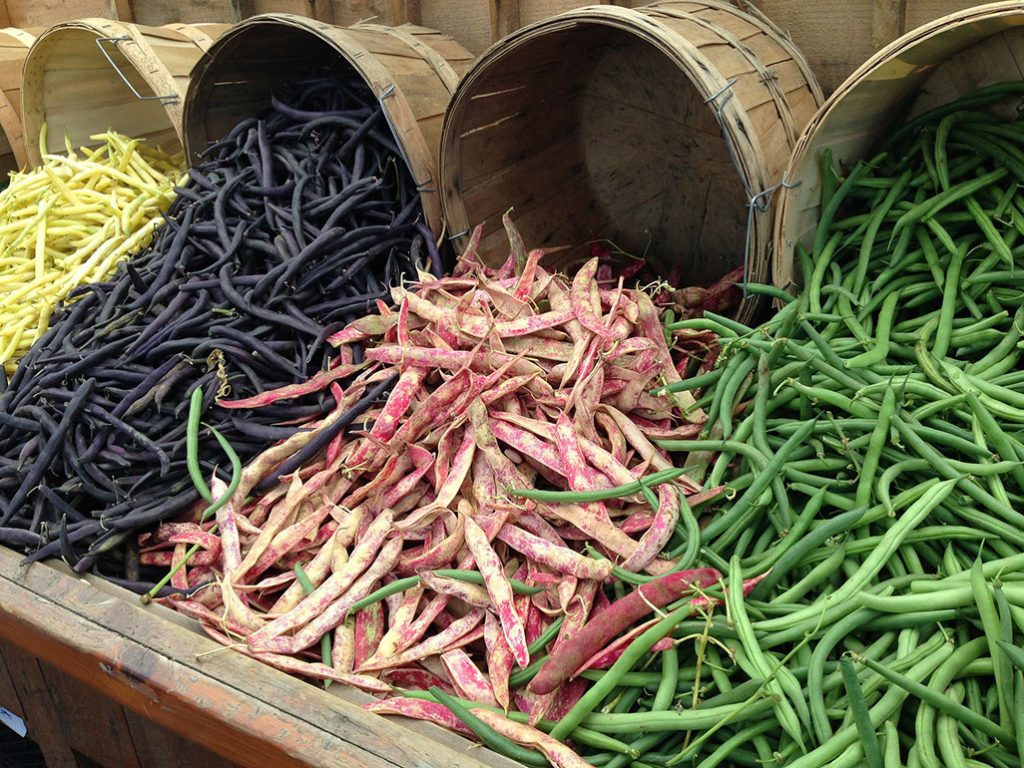 Considering our growing problems of food insecurity, climate catastrophe, and population explosion, beans may yet save our species. At present, most of the grain (and soy) is produced as animal feed, but this is a highly inefficient way of fulfilling the world’s protein requirements: it takes 7kg of grain to produce just 1kg of meat. Many more people’s nutrient requirements could be met if the land was used to grow food for direct rather than indirect human consumption.

It would go beyond the scope of this article to discuss each edible member of the Fabacaea separately. Suffice it to say that there are enough varieties to try a different one for every day of the year.

But, this would mean cutting back on cattle farming just at a time when more people than ever can afford to buy meat on a regular basis. If trends in Japan can be regarded as indicative, the demand for meat will grow rapidly, especially among the middle classes of the emerging economies. In Japan, (traditionally a fish-eating culture) meat consumption has increased by 360 percent (!) between 1960 and 1990 (Shah and Strong 1999:19). Due to religious taboos this trend is less pronounced in India, but not elsewhere.

Fortunately for our planet, vegetarianism and veganism are spreading, along with a general reduction in meat consumption among ‘flexatarians’. It is difficult to pinpoint exactly what is driving this change, but health concerns are one likely cause, while the other might be a growing awareness regarding the impact of a meat diet on climate change. Even the UN has called for a change in dietary habits in an effort to reduce CO2 emissions. Livestock produces 14% of greenhouse gases, second only to energy production and more than the emissions produced by all means of transportation put together.  Besides, methane, which is produced by cattle ’emissions’ (burps and farts, basically), has a far greater impact as a greenhouse gas than CO2).

America, Oceania, and Europe are still the top meat consuming regions of the world, on average consuming 3 times as much meat as Asia. 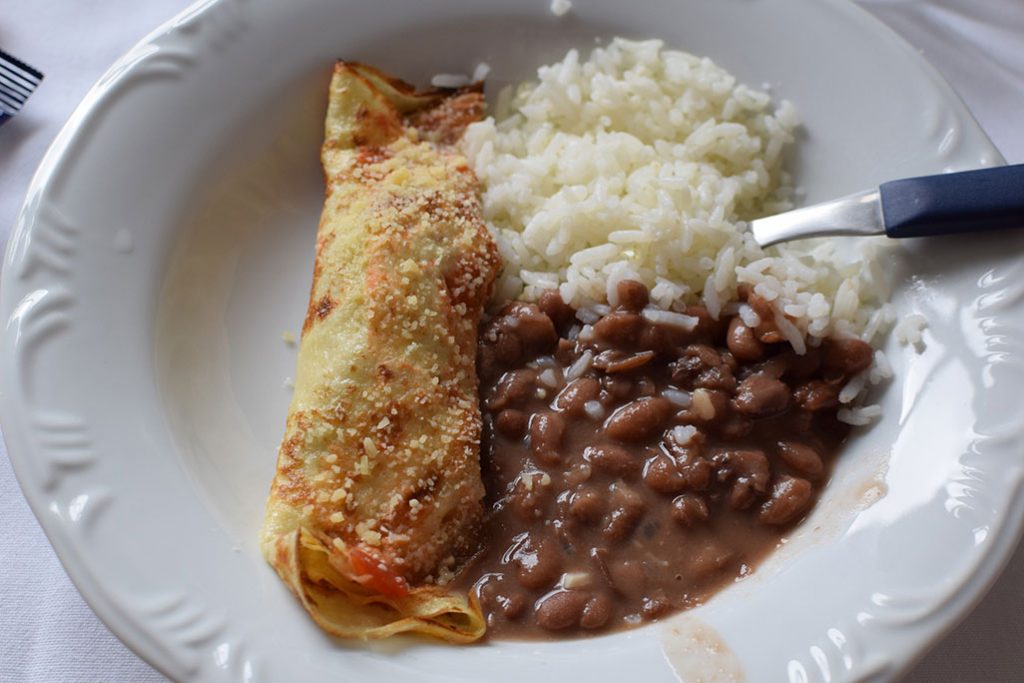 The problem with soy

Pulses are becoming increasingly popular and none more so than soy. They have been riding a wave of success. Along with wheat, maize, rice, and potatoes soy are one of the 5 top crops worldwide. Soy is also one of the most likely crops to have been genetically engineered. It is difficult to find any truly organic sources. The reason that the food industry loves soy so much is because of its versatility. Soy proteins and oils are used in an incredible range of things (not just food), which makes it a sure fire, immensely profitable crop. However, apart from the GM prevalence, there are a number of other concerns that suggest soy may not be the solution to all our woes.

Most soy is produced for animal food, and just as worryingly, for use as biofuel. This is marketed as a ‘green’ product, but nothing could be further from the truth. Much of the world’s soy is produced at the expense of rain forest, which is cut down to make way for the soy. (see The Perilous Progress of the Soya Bean)

In addition to their excellent protein profile (17 – 25%), beans are also rich in fibre, which can help to reduce cholesterol levels. In themselves, they contain very little fat and no cholesterol at all. Thus, they are an excellent choice for a ‘heart healthy’ diet. Many types of beans can be sprouted and produce fresh, crunchy greens that can be used to top soups, sandwiches or salads.

Black beans are rich in anthocyanins, a powerful antioxidant. Researchers have found that the darker the bean ‘coat’ the higher the proportion of antioxidant compounds. Thus, black beans lead the pack, followed by red, brown, yellow, and white beans.

They are also rich in vitamin B1, folate, molybdenum, manganese, tryptophan, magnesium, and iron. Soy is rich in calcium. However, there are some concerns over unfermented soy. Another health concern regarding soy is the fact that what ends up in processed foods are mostly isolated soy compounds, such as isoflavones. These act as endocrine disruptors and are considered detrimental to thyroid health. Caution is advised.

Medicinally, the husks of the Phaseolus species rather than the beans themselves are used. Dried bean pods are strongly diuretic and are said to be able to dissolve small gravel and stones in the urinary system. The decoction is recommended for edema, especially where this is due to general kidney or cardio weakness. Old herbals claim this to be the most effective remedy to release excess water from the body. It is thus recommended as a remedy for flushing out uric acid crystals and other metabolic waste products. This is interesting, as beans contain purines, (also found in meats and other foods), which the body breaks down to form uric acid. The shells, therefore, provide a remedy for one of the health hazards associated with excessive consumption of beans.

Such a decoction is also said to be useful for controlling blood-sugar spikes associated with diabetes and hypoglycaemia. Beans themselves are beneficial for diabetics as their energy is released slowly and steadily (low glycemic index due to high fibre content), rather than in one big rush as is common with simple carbohydrates. 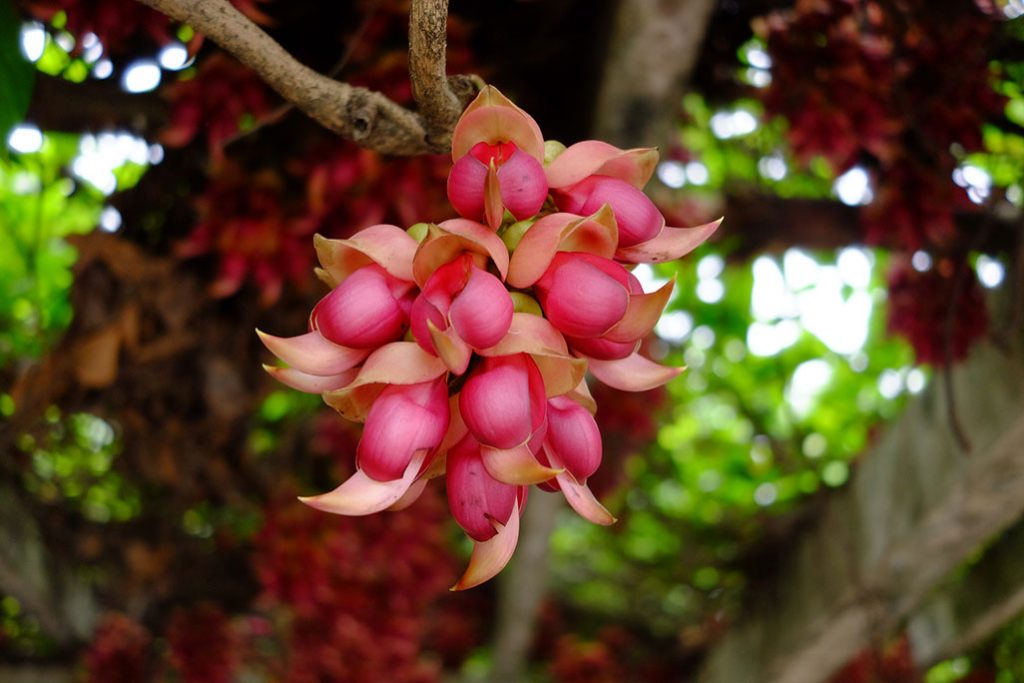 Mucuna pruriens, also known as cowhage or velvet bean, is not commonly used as food, although the young shoots and seeds can be eaten if prepared correctly. This interesting bean contains L-DOPA, a precursor of the neurotransmitter dopamine. It is occasionally used as a natural remedy for Parkinson’s disease, in which reduced dopamine levels play a major role. However, self-medication is not recommended, as dosing can be difficult.

The plant also contains dimethyltryptamin and has been used as an additive for ayahuasca preparations.

In traditional Ayurvedic practice, it is known as an aphrodisiac, a claim that is supported by a study involving rats. Apparently, their consumption of mucuna resulted in raised testosterone levels.

Indian medicine uses it to treat cholera, delirium, impotence, spermatorrhoea, urinary troubles, and to expel roundworms. An infusion of the ‘hairs’ that cover the pods is said to aid in the treatment of liver and gall bladder diseases. Externally,  it is applied as a local stimulant and mild vesicant (Parrotta:2001).

In magical herbalism, it is occasionally used in the practice known as ‘lucid dreaming’.

Although mostly harmless, there are two diseases that are associated with the consumption of beans: favism and lathyrism.

Lathyrism is a condition that causes paralysis of the lower limbs as a result of excessive consumption of Indian Pea (Lathyrus sativa). This is not usually a problem when the pea is consumed as part of a normal diet. But in times of drought or scarcity when other foods are less available, it can become problematic. Indian pea, is extremely resistant to drought, and may be one of the few things around that are still edible. The paralysis can be permanent.

Favism is an acute anemic condition, which results from eating partially cooked or raw broad beans (Vicia faba). Even inhaling the pollen can cause this condition. Curiously, it only affects males of Mediterranean origin.

Pythagoras may have suffered from this condition as he vehemently rejected beans as a source of food. On the other hand, his objections may have had religious reasons. In Orphism, an ancient religious belief of the Greeks, beans are considered sacred to the Goddess and it was believed that each bean contained a soul. Or, Pythagoras might have considered beans too lowly a food, as even in his days, beans were regarded a peasant food.

The flatulence associated with bean consumption only occurs with dried beans. This is due to the fact that the human digestive system finds the oligosaccharides (a complex carbohydrate, which form during the drying process), hard to break down. The effect can be reduced by soaking the beans in two changes of water before cooking them. (soak, drain, soak again, drain, add more water, then boil ). Adding certain herbs and spices, such as epazote (Mexican favourite), fenugreek, cumin, coriander etc. can also help to minimize the flatulence effect.