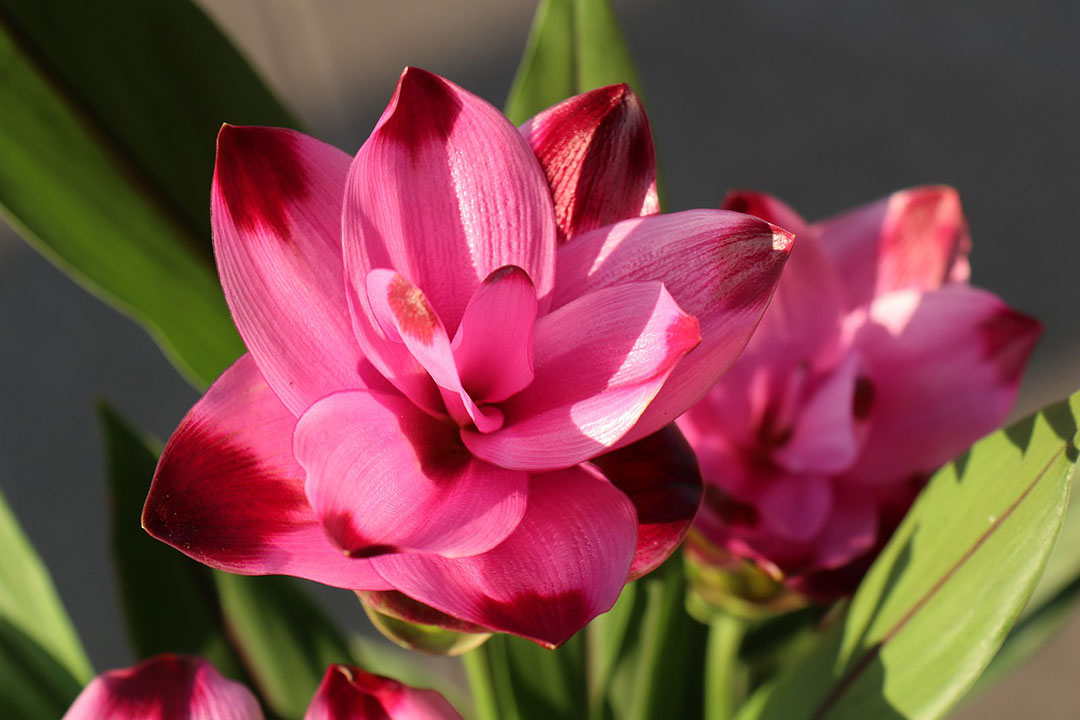 Turmeric belongs to the family of Zingiberaceae, the ginger family. Anybody familiar with this family of plants will readily recognise this kinship even upon superficial examination. Turmeric is an upright, relatively short and stout plant that rarely reaches more than about 1 meter in height. Its leaves are elongated, dark green and pointed, often curling slightly along the margins. Each individual leaf rises directly from the fleshy rhizome at the base. The rhizome appears scaly, due to the remaining rings of previous leaves. Its outer skin is brownish, but its flesh is deep orange-yellow inside. Rhizomes grow to about 5-8 cm x 1.5 – 2.5 cm. When bruised they omit a spicy scent. The flower stalk will appear among the leaves, also emerging directly from the rootstock. The cylindrical spike, which may be partially protected by a leaf sheath, bears the whitish-pink flowers, which spiral around the spike. Each flower is protected by a little ‘pocket’ called bracteoles. Turmeric mostly propagates vegetatively via its rhizome segments.

Turmeric probably originated in India and is thought to have derived from the wild species C. aromatica. The greatest variety of species is found in India, Sri Lanka, and the Eastern Himalayas. It is now common throughout Southeast Asia, China, and southern Australia and it is widely cultivated throughout the wet tropics, where it has naturalised. The lion share of all the Turmeric that is produced worldwide is grown and consumed domestically in India.

The name of the genus, ‘curcuma’ is derived from the Arab word ‘kurkum’. Most likely it found its way to the Occident with the caravans of Arab traders. Its Sanskrit name is ‘haridra’, which means ‘yellow wood’. 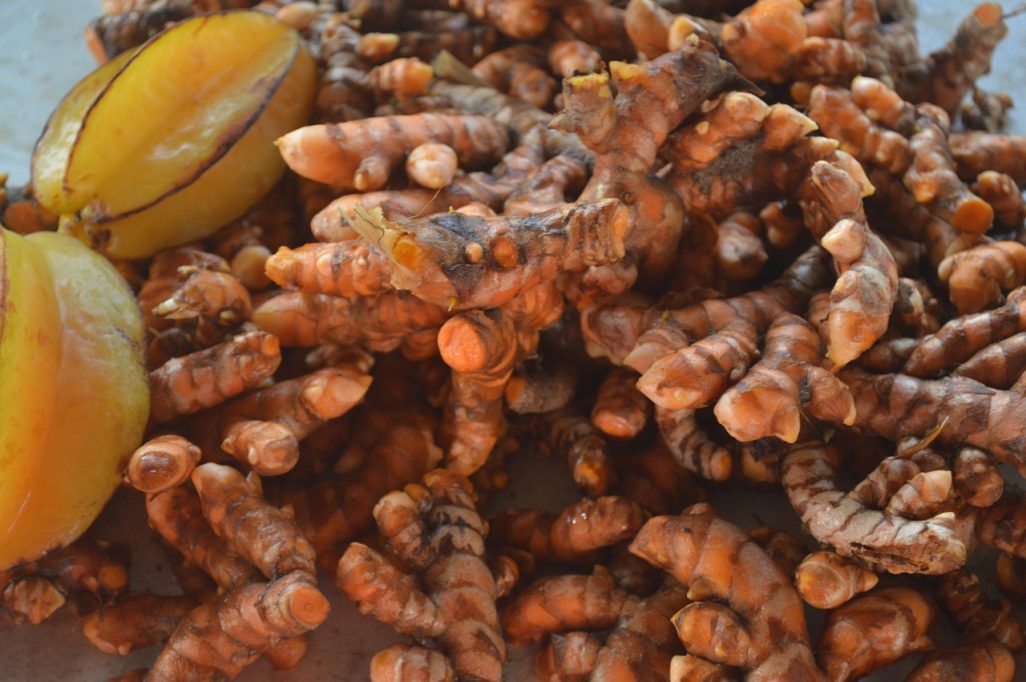 Turmeric has a long history of use, not just as a spice, but also as a healing agent and a magical herb. As a spice, it is best known as one of the principal components of curry powder, to which it dons the characteristic yellow colour. Curry powder is often mistakenly believed to refer to a specific spice blend or to be derived from a single plant. Nothing could be further from the truth! There are dozens of curry blends that all vary in their composition. The best are those that are prepared from scratch for each individual dish. These spice blends are indeed a far cry from the generic mixtures found on supermarket shelves.

Here is one of many possible Curry powder blends:

This basic mix is often varied with cloves, cumin or cardamom. In India, fish is sometimes wrapped and cooked in fresh turmeric leaves to impart the characteristic flavour. As a spice, turmeric adds a warm, aromatic, slightly astringent note.

It is a carminative and stomachic that stimulates the digestive processes, soothing indigestion and reducing flatulence.

When Europeans first encountered turmeric they often falsely identified it as saffron. Although it makes a perfect food dye, its properties and flavour do not compare to those of saffron. In India turmeric is indeed widely used as a dye, especially for ritual foods that are offered to the Gods at the temples and as a textile dye (Buddhist robes are traditionally dyed with turmeric). Carbonate of soda helps to fix the dye, although it is not very permanent. Sometimes Turmeric is used as a cosmetic agent, and as make-up for weddings and other festive occasions. The food industry employs it as a colorant for cheese, sausage, and confectionery.

In folk-magic, Turmeric is linked to fertility. There may be a biochemical basis for this association, as medicinally it is used to regulate menstruation and to reduce menstrual cramps. It is also thought to have protective powers and is sometimes worn as a magical charm.

After harvesting, the root is cured for long-term storage. This will prevent them from sprouting new leaves. The traditional method of curing is to boil or steam the fresh rhizome in lime or sodium carbonated water. This cleans the root, stops all germination, gelatinises the starch and removes the earthy scent. After boiling, the rhizomes are dried in the sun and ground into powder. Modern preparation techniques use 20 g sodium bisulfite and 20 g hydrochloric acid per 45 kg of rhizomes, which are boiled in a kind of steam boiler. The result is a cleaner, yellow-tinted rhizome that is deemed ‘more attractive’ in commerce. The roots are then artificially dried, rather than sun-dried, which improves their quality and reduces the risk of fungal growth or other contaminants. 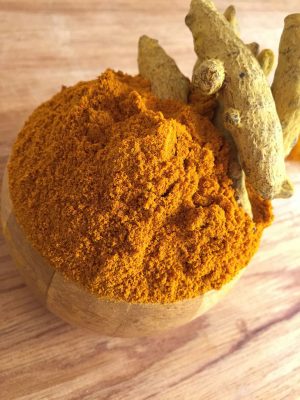 The essential oil of turmeric and the colour component are very light-sensitive and deteriorate quickly when exposed to light. Thus, it is essential to store the powder in a dark jar. A pale colour indicates that the active constituents have lost their potency. When purchasing turmeric pay attention to the packaging date as it rarely lasts for more than 3 months. Turmeric is insoluble in water, but soluble in alcohol. Preparing a tincture is, therefore, a good way to preserve the healing properties. When used in cooking, stir the powder into the hot oil before adding the other ingredients. This will transfer the flavours and benefits to the oil, which will then coat the other ingredients as they are added to the pan.

As its signature indicates, Turmeric is an excellent herb for the liver: It is used for treating jaundice and to stimulate the gallbladder. It is a great digestive aid and helps the body to break down and digest fatty foods. Clinical trials show that it reduces cholesterol levels. Turmeric also has germicidal properties. Its traditional indication for gastric ulcers may be due to its effectiveness in fighting the H. pylori bacteria, which has been identified as the major cause of gastric ulcers. (Munzenmaier 1997 )

In Ayurvedic medicine, turmeric is considered a ‘pitta’ substance due to its action on the digestive system, aiding the metabolic process and the absorption of nutrients. It is said to ‘stimulate the digestive fire’.

Some traditional healers use it as a remedy for treating cough or cook it with milk and other spices to ward off a cold.

Applied externally, in combination with Neem leaves, it said to be effective for treating ringworm and scabies. Traditionally it has also been employed in the treatment of eczema, leprosy and purulent inflammation of the eyes.

In Chinese medicine, it is indicated for shoulder pain, menstrual cramping, colic, and rheumatoid arthritis.

Recent studies have also found turmeric to be an effective agent to inhibit certain types of cancers. It has been administered both internally and externally to aid the healing of cancer lesions and scars. It is also used for reducing the odour of cancer.