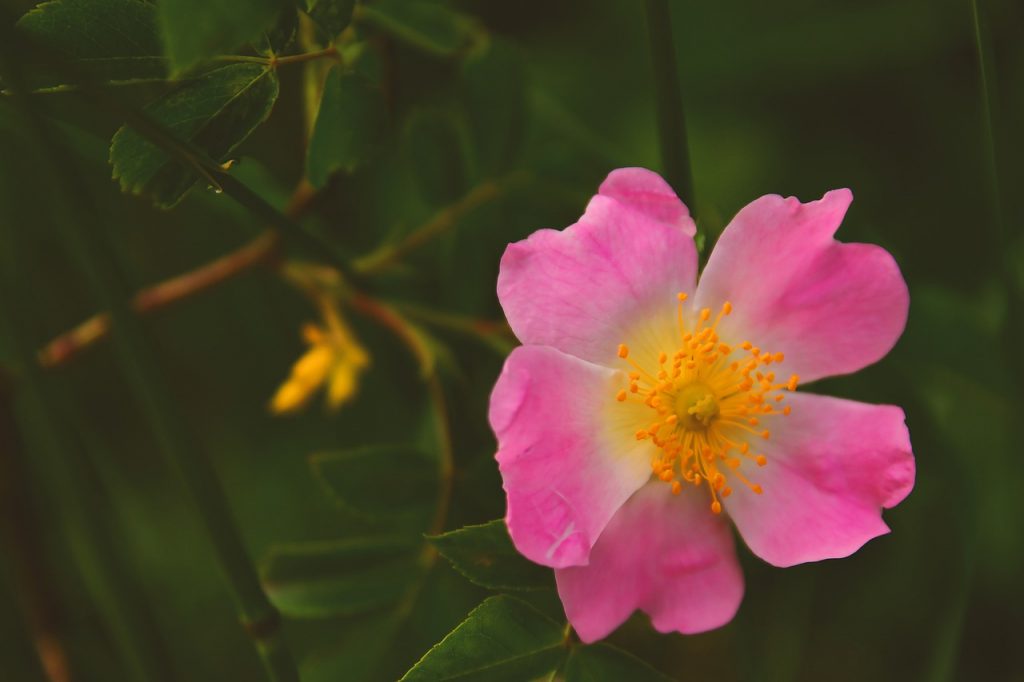 The petals are the source of the essential oil, which gives the rose its characteristic scent. But, the amount of essential oil they contain is tiny. Extracting the EO by distillation requires 5000kg of rose petals to yield 1kg of the precious oil. To put that into perspective, it requires approximately a bathtub full of petals to yield 1ml of the oil. The concentration of essential oil actually fluctuates throughout the day and is at its peak in the early hours of the morning, before the sun has reached its zenith. Flower pickers work from dawn to midmorning to pick the flower heads.

Rose Absolute is obtained by solvent extraction which is more efficient. It yields 10 times as much essential oil and also preserves some of the more fragile compounds. However – in Aromatherapy Absolutes are often avoided as they can contain residues of the hexane solvent.

Rose essential oil consists of a highly complex combination of more than 300 different compounds. Chemists have not been able to imitate most of them in the laboratory. Among them are: citronellol, geraniol, nerol, linalool, phenyl ethyl alcohol, farnesol, stearoptene, and many other trace constituents

Each species used for oil production has a different chemical profile and thus, a different scent. Moroccan Rose Oil (Rosa centifolia) is rich in Phenylethanol (63%) but contains less Citronellol (10-15%), Geraniol, and Nerol (8%).

The Bulgarian type (Rosa damascena) is naturally rich in Citronellol (35-55%), Geraniol, and Nerol (40%) but has only 2% Phenylethanol. Although traditionally Rosa gallica was used for medicinal purposes, today it is very difficult to verify the exact species of petals one might find on the market, as there is much adulteration going on. Rose petals used for medicinal purposes should be deep crimson in color and have a strongly aromatic scent.

Rosehips are very rich in vitamins and minerals. Their vitamin C content surpasses that of oranges or kiwis. For many years they were ‘official’ in the pharmacopeias but nowadays they have been demoted to the status of a mere ‘flavoring agent’. Rose hips are a common ingredient of fruity tea blends. The seeds yield both, cold-pressed essential fatty acids and essential oil, which is obtained by CO2 extractions

The cold-pressed oil contains gamma-Linolenic acid (GLA), which is highly beneficial for the skin as it stabilizes the barrier function, thus reducing the loss of moisture. GLA is also a hormonal precursor and used to alleviate symptoms related to decreased estrogen levels. The oil is not used internally but is very valuable as an ingredient of therapeutic cosmetic products. GLA’s help to tone skin that is dry, inflamed, and tired from excessive UV radiation. Unfortunately, the seeds are very hard, and pressing oil from them at home is not feasible.

The following information is largely historical as neither rosehips nor rose petals are used medicinally today.

Ancient herbalists observed the plants they used very closely. Tabernaemontana describes in great detail the different qualities of various types of roses. He notes that the Apothecary’s Rose is astringent and slightly bitter, not as noble as some of the other types. Fresh rose petals are more bitter than dried ones, which tend to be more astringent. He recommends them mostly for mild diarrhea.

Culpeper also recommends them for their astringency:

The Decoction of Red Roses made with Wine and used, is very good for the Headache, and pains in the Eyes, Ears, Throat, and Gums, as also for the Fundament, the lower Bowels, and the Matrix, being bathed, or put into them. The same Decoction with the Roses remaining in it is profitably applyed to the Region of the Heart to eas the Inflamation therin; as also St. Anthonies fire, and other Diseases of the Stomach. Being dried and beaten to Pouder, and taken in steeled Wine or Water, it helpeth to stay Womens Courses. The yellow threds in the middle of the red Roses (which are erroniously called the Rose Seeds) being poudered and drunk in the distilled water of Quinces, stayeth the overflowing of Womens Courses, and doth wonderfully stay the Defluxions of Rhewm upon the Gums and Teeth, preserving them from corruption, and fastning them if they be loose, being washed and gargled therewith, and some Vinegar of Squils added thereto.

Rose petals have been used to stop bleeding and to inhibit unnatural fluxes. The tea or decoction has been used to treat colds, bronchial infections, gastritis, diarrhea, and as a tonic to lift depression and lethargy.

Externally, rose petals been used as an eye-wash to treat eye infections, as a gargle for sore throat, laryngitis, and stomatitis. The decoction can be used to wash minor skin injuries or inflammatory skin conditions. The old herbalists used them to treat ‘the rose’ (Erysipelas). Roses were thought to be ‘cooling’ which made them suitable for treating ‘hot’ inflammatory conditions.

Rosewater was also popular, and not just as a cosmetic agent. It was also used for treating sore and inflamed eyes and for inflammatory skin conditions.

Today, Rose Essential Oil is the most valuable as a therapeutic agent, particularly for female issues, such as menstrual and menopausal problems. In Aromatherapy, it is indicated for female hormonal problems that have a distinct emotional component. Rose oil is said to ‘open and to balance the heart chakra’ and to gently unclog congested emotional energy that may lie at the root of such ‘female troubles’. Rose can be used to help promote inner peace and self-acceptance. It seems to subtly influence emotional conflicts between giving and taking and can help with deep-rooted sexual repression. Rose oil is said to soothe emotional pain that arises from insecurity and a lack of self-love: jealousy, possessiveness, disappointments, and sadness caused by inappropriate or excessive attachment, fear of letting go, heartache, and depression.

Rosehip tea is a standard children’s drink, and for good reason: it is refreshing and full of vitamins. Rosehips are especially rich in vitamin C, A, and K. The red pigment is due to lycopene, the same substance that gives tomatoes their color and beneficial properties. Lycopene has been investigated as a cancer-inhibiting substance. Rosehips are a great immune system booster and free radical scavengers. In northern countries, where citrus fruit has only been introduced relatively recently, rosehips once were an extremely important source of vitamin C. All kinds of recipes can still be found in old country herbals and recipe books:  rosehip syrup, rosehip soup, rosehip jelly, rosehip butter, and even rosehip wine have long been popular. However, speedy processing is all-important as an enzyme present in the rosehips quickly initiates a process of deterioration, as soon as the hips are cut. The vitamin C oxidizes and becomes worthless. To prevent this, the hips immediately submerged in hot water, once they have been cut, thereby killing the enzyme.

The most tedious part of processing rosehips is to clean them and to scrape out the fine hairs, which are irritating if ingested.

Chilean researchers have found Rosehip seed oil to be extremely nutritious and healing for the skin. The oil is very rich in polyunsaturated fatty acids, especially GLA. This oil is obtained from a variety of roses that are native to the Chilean Andes (Rosa moschata and Rosa rubiginosa. Due to their high concentration of essential fatty acids (80%), the seeds yield a light, gently astringent oil with excellent nourishing, moisturizing, and toning qualities. Rosehip oil is not used for culinary purposes, but its oil is excellent for cosmetic uses. It is particularly recommended for facial blends and lotions to nourish tender tissues around the eyes and to maintain skin tone (Anti-aging creams). It is also used in ‘after sun care lotions’, on stretch marks, for seborrheic dermatitis, inflammatory, and aging skin, as well as on scars, wounds, and burns.

There are many ways to use rosehips or rose flowers to make delicious syrups, conserves, jams etc.

This is a Scandinavian recipe, where berry soups are a normal part of the diet.

Mash the Rosehips in a grinder or food processor and immediately add to the boiling water. Strain through a cheesecloth and add the juice and zest of an organic, untreated lemon. Dissolve the starch with a little water and stir into the liquid. Bring to the boil while stirring continuously until it thickens slightly. Other spices may be added, e.g. vanilla, cinnamon, or clove.

This syrup can produce widely varying flavors depending on which kind of rose you use. I prefer the less perfumed ones, like ordinary Dog Rose. Others prefer the strong flavor of R.gallica.

This is a deep cleansing face mask that draws impurities, tightens the pores, and drys oily skin. Should not be applied more than once or twice a week.

Moisten the clay with the rosewater and honey to make a paste. Add the essential oils. Apply to the face and neck and leave for about 10 minutes. Wash off with plenty of warm water. Dapple skin with rosewater and apply a gentle, soothing oil, such as almond or peach kernel oil. 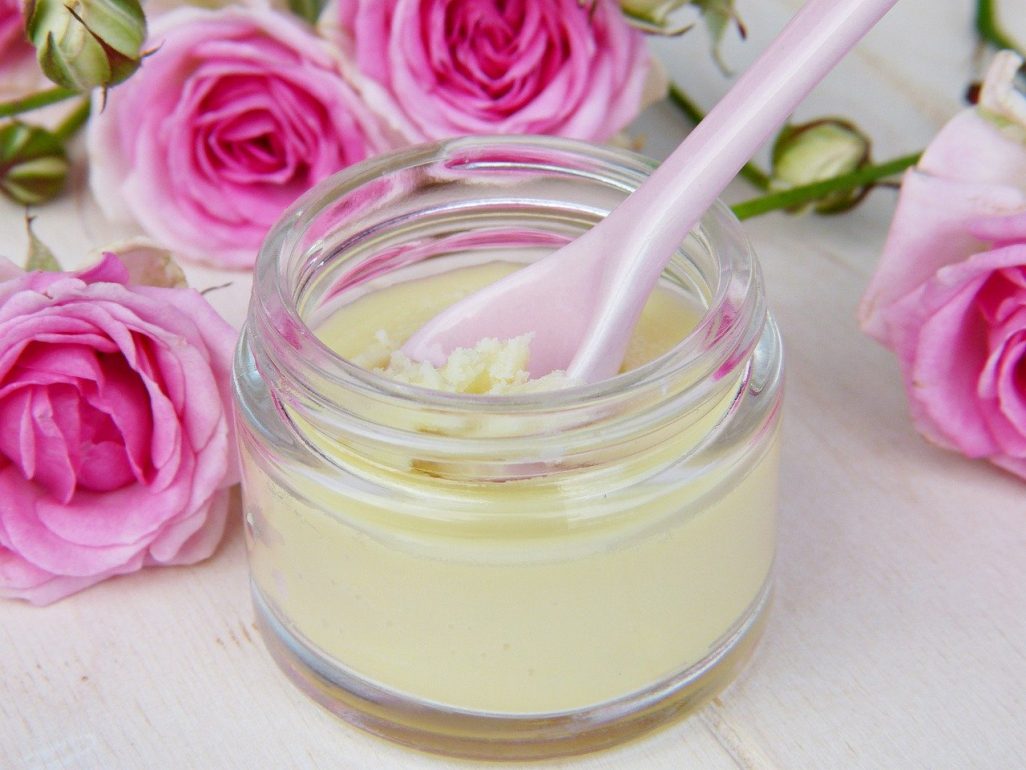