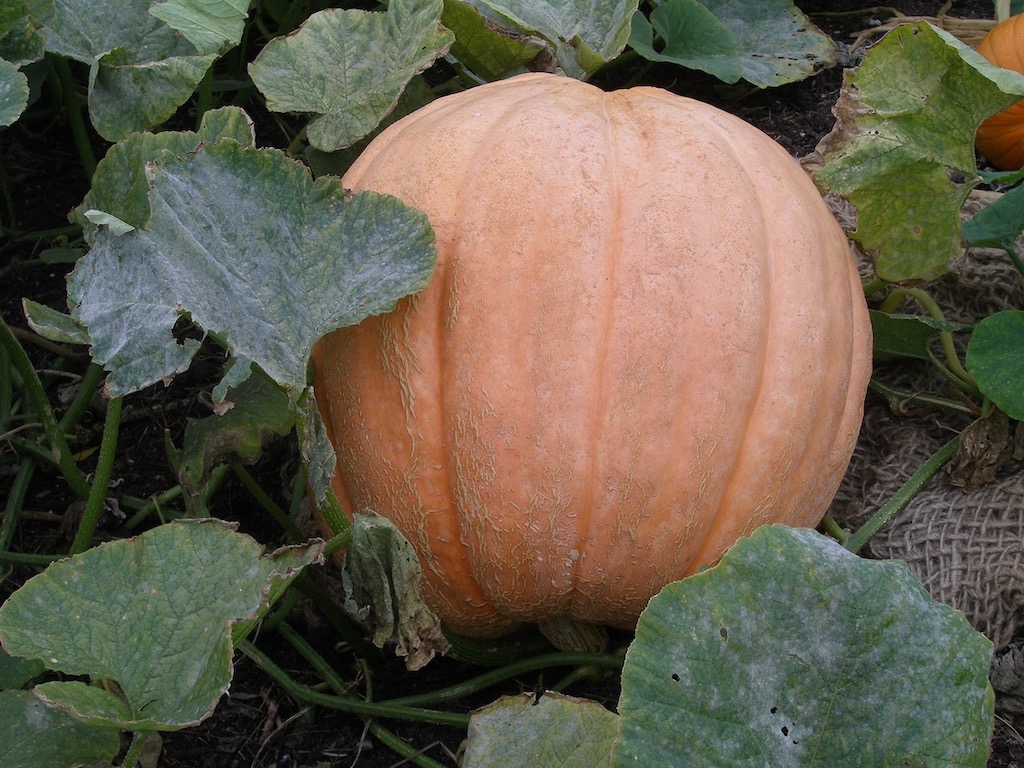 Since it is nearly Halloween I thought I’d write a post about Pumpkins – predictable I know, but nonetheless fascinating. Pumpkin, a member of the gourd family, belongs to a huge group of cultivars that are all variations of the winter squash. They come in a truly amazing range of shapes, colors, and sizes. Talking about size – some growers have developed the strange ambition: who can grow the BIGGEST Pumpkin of them all? The jury is still out, but growers have already managed to produce some pumpkins of absurd, even obscene sizes. So far, the largest Giant Pumpkin (Cucurbita maxima) ever reported is said to have weighed more than a ton! Other common cultivars are Cucurbita pepo (e.g. Acorn and Halloween type squash) and Cucurbita moschata (e.g. Butternut squash).

The gourd family is native to the Americas. Wild members were used as long as 10 000 years ago, and the family was one of the first to be domesticated. Various types of squash and gourds have been cultivated in Central America since about 7500 – 5000 BC!

They have never lost their appeal. On the contrary. New forms have been developed and Pumpkins, Squash, and Co. have now spread around the globe. 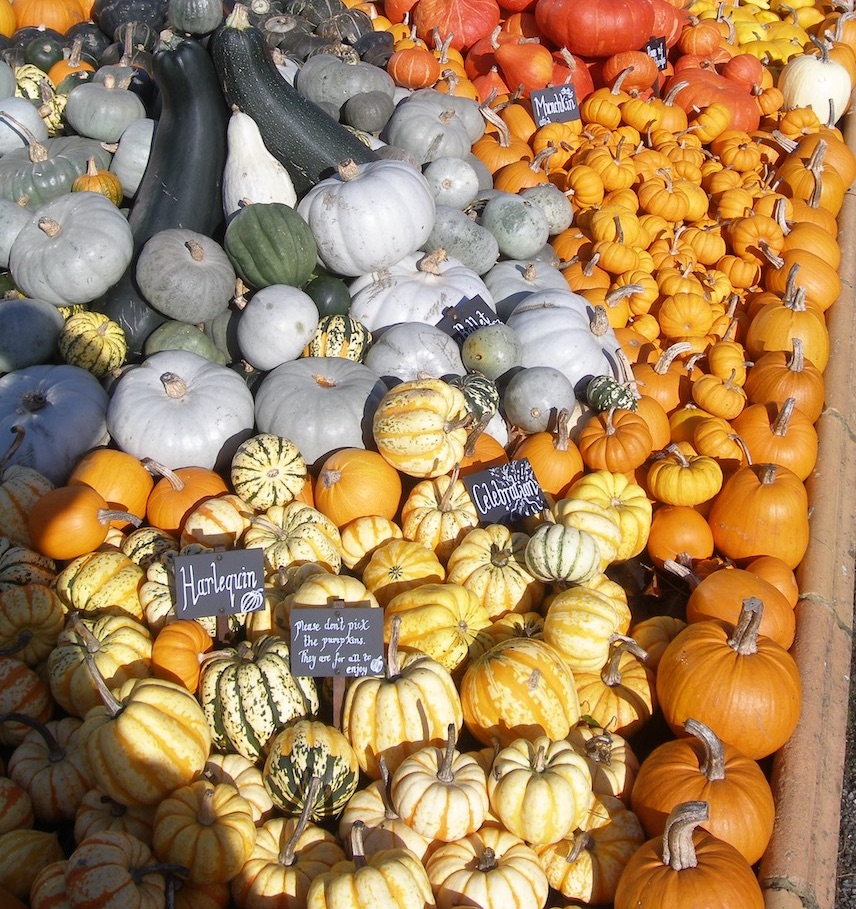 Archeobotanist have found the earliest evidence of Pumpkin use in the Oaxaca region of  Mexico, but its native range comprises both, the northeastern corner of Mexico and the southwestern United States.

What’s in a name?

In the US and the UK the term ‘Pumpkin’, which seems to have derived from a Native American word for ‘a big round fruit’, only refers to the familiar round orange winter squash best known as Halloween decorations. But in New Zealand, the word is used for all types of winter squash.

The German word ‘Kürbis’ derives from the scientific name of the family of ‘Cucurbita’.

Botanically, Pumpkins are classified as ‘berries’, but no-one except botanists would think of them that way. Edible Pumpkins are mostly grown for the orange fruit flesh, which is incredibly versatile and can be used in countless sweet and savory dishes, most famous among them, Pumpkin pie! But the seeds are also edible and yield an edible and deliciously nutty oil that is rich in vitamin E and linoleic acid. It is not suitable for cooking, as its delicate constituents are destroyed at high temperatures, but it is excellent for adding an extra flavor dimension to soups and salads.

Even the flowers are edible. Stuffed and fried they are a delicacy.

It may come as a surprise that pumpkin is quite low in carbohydrates – the caloric value is 66% less than that of potatoes. Nutritionally, pumpkin scores high in beta carotene, the precursor of vitamin A that is so important for the immune system. It also contains pectin, a type of fibre that not only promotes a sense of satiety but also regulates the flow of sugars in the GI tract after a meal. It is thus a very beneficial food for people with metabolic issues. However, it is difficult to predict exactly how much pectin will be present in any particular pumpkin. The content level varies depending on the time of harvest as well as the method of preparation.

Pumpkin also contains vitamin C, B2, and B6. But, amazingly, it has a water content of 92%!

Pumpkin is a therapeutic food that can boost the immune system and soothes kidney and bladder conditions. The seeds are rich in zinc which boosts the immune system. They are also indicated as a supportive nutritional remedy in the treatment of enlarged prostate glands. The Aztecs used the seeds as a remedy to expel worms, a use that has been adopted by western herbalists. 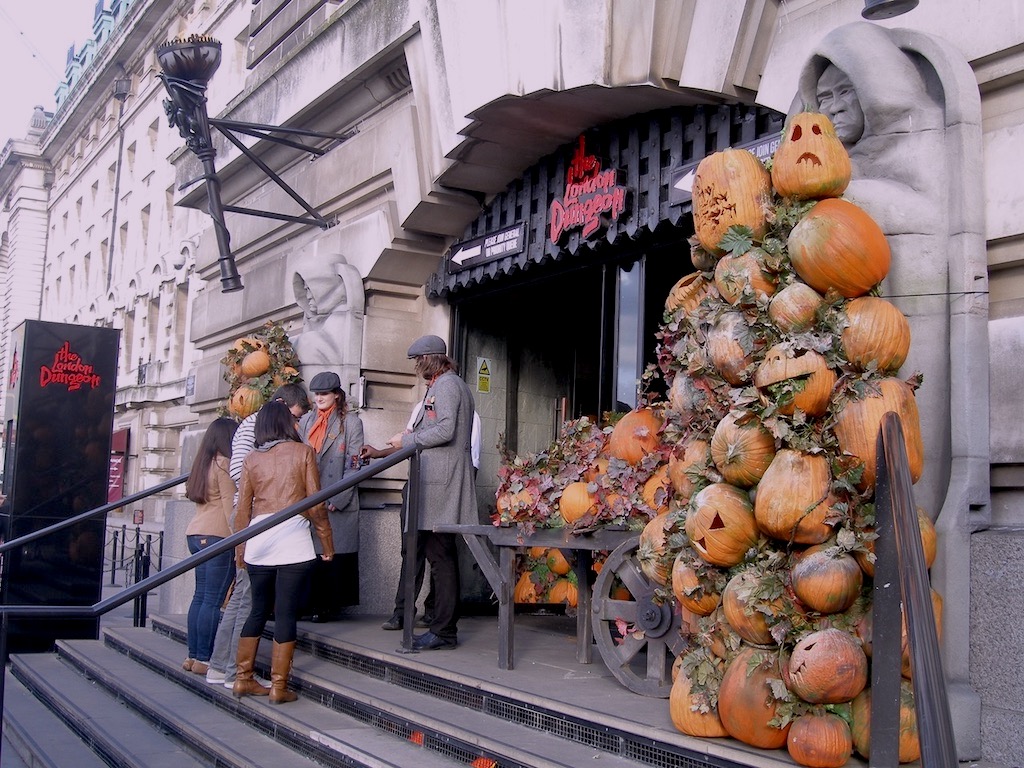 Traditionally, the Halloween pumpkin was a Turnip. I kid you not! It was once a relatively local folk custom in Ireland to carve a Turnip at Halloween. The effigy was known as Jack-o-lantern, which has its origin in an Irish folk tale about a stingy guy called Jack (Stingy Jack, actually)

The Tale of Stingy Jack

Once upon a time, a long, long time ago, Stingy Jack had some drinks with the devil but did not have the money to pay for them. There must be some pretty stupid devils in Ireland – Jack manages to persuade this devil to change himself into a coin so he could pay for the drinks. But as soon as the devil obliged him Stingy Jack decided to keep the coin instead! He put it into his pocket next to a silver cross, thus preventing the devil to change back into his original form.

Eventually, he made a deal with the coin. He freed him on the condition that he would leave him alone and not bother him for a year and a day, not claim his soul, should he die in the meantime. After a year and a day had passed the devil returned and stupidly allowed himself to be tricked again. This time Jack had sent him up a tree to pick a fruit and while he was up there, had carved a cross into the bark. Thus the devil was stuck again. Jack demanded that he would leave him alone again for a further 10 years.

But Jack did not live that long. Soon after the second episode with the devil he died. But despite his posturing with the cross and all, God was not pleased with his conduct and refused entry to heaven on account of his dishonesty. This was a bit of an unforeseen dilemma for Jack, since the devil, still upset with him for tricking him and being mean, also refused him entry to hell. Besides, he had given him his word that he would not claim his soul for 10 years.

Thus, the devil sent Jack off with only a piece of coal to keep him warm and to light his way through the twilight zone. To carry the coal Jack carved out a Turnip to safeguard his chunk of coal, and to this day he roams the land as the lost soul known as Jack O’Lantern.

When the Irish arrived in the United States they brought their story of Jack O’Lantern and their custom of carving the Turnip with them. When they came across the Pumpkin they were delighted as Pumpkins are much easier to carve than Turnips! And, as they say, the rest is history.

Remembering the dead, honoring the spirits

This is the most common story regarding the use of pumpkins at Halloween. But in fact, the real story is much older. In Celtic Ireland, the custom of the carved out Turnip root far predates this Christianized tale. Originally, it is related to the Celtic Festival of Samhain (November 1st), which marks the end of the growing season. At this time, the veil between the worlds is said to be thin and spirits of the deceased leave the Other World to roam among us and to beg for food. It was customary to put out a little food and drink for these spirits and a carved-out Turnip with a candle placed inside was hung up so they could find their way. In turn, the spirits blessed the souls of those who provided for them. The day that marked the occasion later became known as ‘All- Hallows Eve’, which in time morphed into ‘Halloween’.

Interestingly, a similar custom is practiced in Mexico, where November 1st is celebrated as ‘El Dia de los Muertos’ – the day of the dead, which combines Catholic elements (All Saints and All Souls day) with pre-Columbian Aztec traditions. It is a day to remember the dead and families gather in cemeteries to make offerings to their departed relatives. Food offerings, including candied Pumpkins, are an important part of the celebrations, as are the sugar skulls and candles are placed on their graves.

As endearing as these ancient traditions of remembering the dead are, the accompanying waste of food is truly shocking. As the Guardian reports, a staggering 12.76 million pumpkins will be purchased, carved up, and then binned over Halloween.