For foragers, this early part of the year, when Mother Earth is just awakening, is a delight. The first tender bits of greenery are poking their leaves through the earth crust, turning the ground green once more. This time of the year is particularly wonderful for foraging young and tender greens. One of the earliest wild edibles that you can always count on is goutweed. Although many gardeners hate it and consider it an absolute bane, I actually love it. There are few wild edibles that are so widely available, and so tasty!

I am probably the only person ever to have said this! Ok, it is quite invasive. Trying to confine it to a particular spot in the garden is quite hopeless as it spreads via its roots. And when you try to weed it out you are sure to break them. But before you know it – hey presto! -it magically regenerates even from tiny bits of root that are left in the soil. It is truly resilient.

This resilience makes Goutweed one of the most abundant herbs.  In mild climates, it pops up as early as February and it is incredibly versatile. s. and can be used with just about anything. I have made soups and salads as well as fillings for things like empanadas, cannelloni and lasagna. Of course, you can just serve it as a green vegetable, or make a pesto with it. It is also one of the best candidates for the ‘greens jar’.

What is a ‘greens jar’

A greens jar is where all the surplus herbs end up when you have picked more than what’s needed for the next meal. I dry them, crumble them up and put them into the jar. I love this concept of an ever changing herb-mixture ready to use in soups and what not when those herbs are no longer in season. 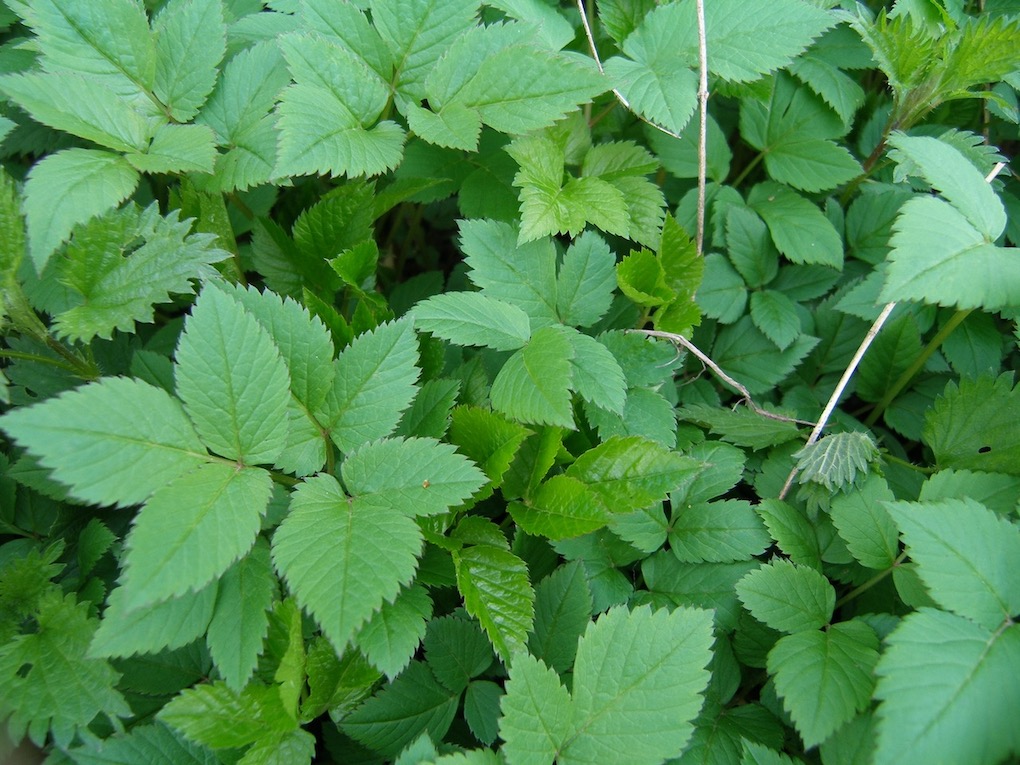 Goutweed is a member of the ‘Apiaceae’, also known as ‘Umbillifer’ or Parsley family. As such, it has many cousins that are commonly used in the kitchen, whether as a vegetable or as a herb or spice, such as Carrot, Fennel, Coriander, Parsley and Dill, to name but a few. However, do not let that deceive you into thinking that all herbs of this family are safe for human consumption.

A positive ID is key

Some members are extremely poisonous – such as, for example, the deadly water hemlock, the herb that killed Socrates. So if you intend to pick ANY of these umbellifers for food, make sure you are absolutely certain that you have ID’d them correctly – a mistake could be fatal and they are not the easiest family to ID.

However, you will be pleased to know that Goutweed does not look much like Water Hemlock, so the chances of mistaking it are quite remote. US-based foragers are more at risk of mistaking it for poison ivy. The leaves of both of these plants sprout in threes and are of a similar size and shape. One distinguishing feature is that Goutweed will NEVER grow like a vine. But poison ivy does not always grow as a vine either.

Once the flowers are out they are easier to distinguish. Goutweed has a typical umbel shaped flower while poison ivy has trailing flower clusters. Goutweed never develops any woody parts and older leaves are not glossy. Prior to unfurling, the very young leaves are shiny and bright green. Goutweed does not look hairy. It usually occurs ‘en masse’ and individual plants grow to about 50-60 cm tall.

Goutweed is common throughout the temperate zone of western Eurasia and has been introduced to Britain and Ireland, to the US and Canada as well as to Australia, Tasmania, New Zealand and Japan.

While it is most common as a ubiquitous garden weed, it can also sometimes be found in the wild. These wild plants are garden escapes. Originally, the Romans spread it throughout northern Europe. In medieval times, it was commonly grown in monastery gardens. For a while, it was even sold at the market. But due to its invasive nature, it eventually lost favour with gardeners and was banned from their plots. And so, it escaped into the wild where it now mingles with nettles and graces damp ditches and partly shaded lanes.

As the name suggests, Goutweed has been used to alleviate the pain of gout. But this use has largely gone out of fashion with modern herbalists. Nevertheless, it is a useful cleansing herb, stimulating the processes of elimination. It is a diuretic, but it also gently stimulates digestive functions and metabolism. Nutritionally, it is a good source of vitamin C and A, and minerals such as iron, manganese, and copper as well as trace minerals such as boron and titanium.

Goutweed is very aromatic and has a flavor that is similar to Parsley and Celery. It is very versatile and can be used like spinach. The young, still folded leaves are best. Older ones are tougher and develop a more pungent flavour. The nice thing is, even once it is harvested it will soon grow back 🙂

Sautee the onions till soft. Add mushrooms and garlic. Add the potatoes and sautee for 3 minutes or so. Add Vegetable stock (about 1 litre) and cook the soup until the potatoes are soft. Add the goutweed and simmer for about 5 minutes. Puree, dilute to desired consistency and add salt, pepper, chilies or other herbs to taste.

Make your empanada pastry (many people just use a basic shortcrust recipe, but feel free to make the dough as fancy as you like.) Chill in the fridge for at least an hour. Roll it out in 6″ diameter rounds.

For the filling, crumble the tofu and fry in a little bit of soy sauce until crispy. Set aside.

And finally, stir in the chopped goutweed and sauté until wilted. You should now have a pan full of delicious filling for your empanadas. Cool the filling for an hour or so.

If the mixture is wet, add some bread crumbs to absorb the moisture.

Place a spoonful of filling in the centre of your empanada round and fold it over to make a parcel. Press together the edges, with a little water if necessary to make them stick. Glaze with egg-wash (egg yolk mixed with a little water). and arrange the empanadas on it. Bake for about 30 min.

No doubt you’ll come up with dozens more delicious recipes – that is the wonderful thing about things like Goutweed, which just provide you with a tasty, healthy green to add to just about anything.