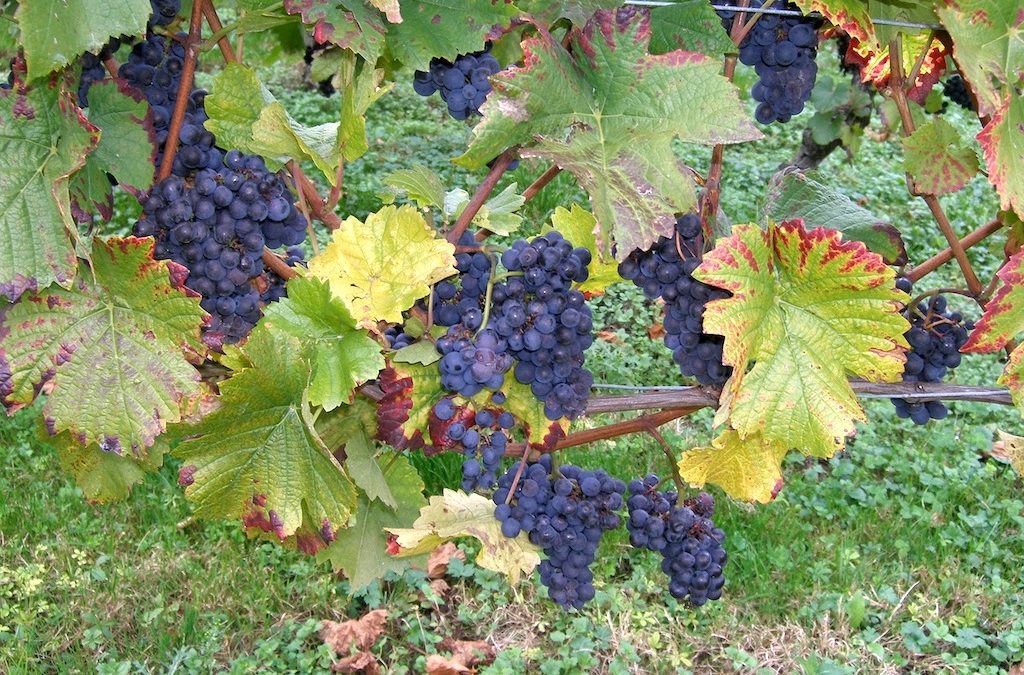 Grapes are one of the most important agricultural crops in the world. But they have far more uses than ordinarily meet the palate. There are at least 8000 cultivated varieties of grapes, most of which are grown in the Northern Hemisphere.

Grapes are one of the most important agricultural crops in the world. From New Zealand to California, Chile, South Africa and of course, their traditional turf around the Mediterranean Basin, grapes are cultivated in Mediterranean climate zones around the world. Grapevines are surprisingly hardy. They can live on next to nothing. They thrive on poor soils, so long as they are well-draining and don’t mind the heat. The only thing they won’t survive is a cold, wet climate.

When left untended, grapevines can reach a height of about 15 m. As climbers, they will scramble up anything that will give them support. In cultivation, they are often trained on wires and cut back after each season so that only the strongest one or two shoots remain.

The gnarly stem forms finely grained, dense wood. The leaves are palmate (hand-shaped) with deeply indented lobes, with very jaggy serrated margins, depending on the variety. In May or June, they begin to flower, forming bunches of tiny, white, 5-petaled flowers with a very delicate and sweet aroma. Alas, this phase does not last long. Soon, bunches of sweet, juicy berries start to develop.

Depending on the variety, their size and colour vary. The smooth-skinned, yellowish-green to reddish, or purple-black berries usually contain 2 seeds each (except for seedless varieties). Vines can be propagated by seed or cutting. Most European stocks are grafted onto American rootstocks due to a devastating blight that nearly destroyed all European vine stocks.

There are also many wild grape species, which also tend to be a meandering bunch. They can sprawl over an extensive area if left undisturbed. Their berries also grow in bunches, but they are much sparser and consist of much smaller berries, which are usually quite tart. Like their cultivated counterparts, the flowers are small and rather inconspicuous. 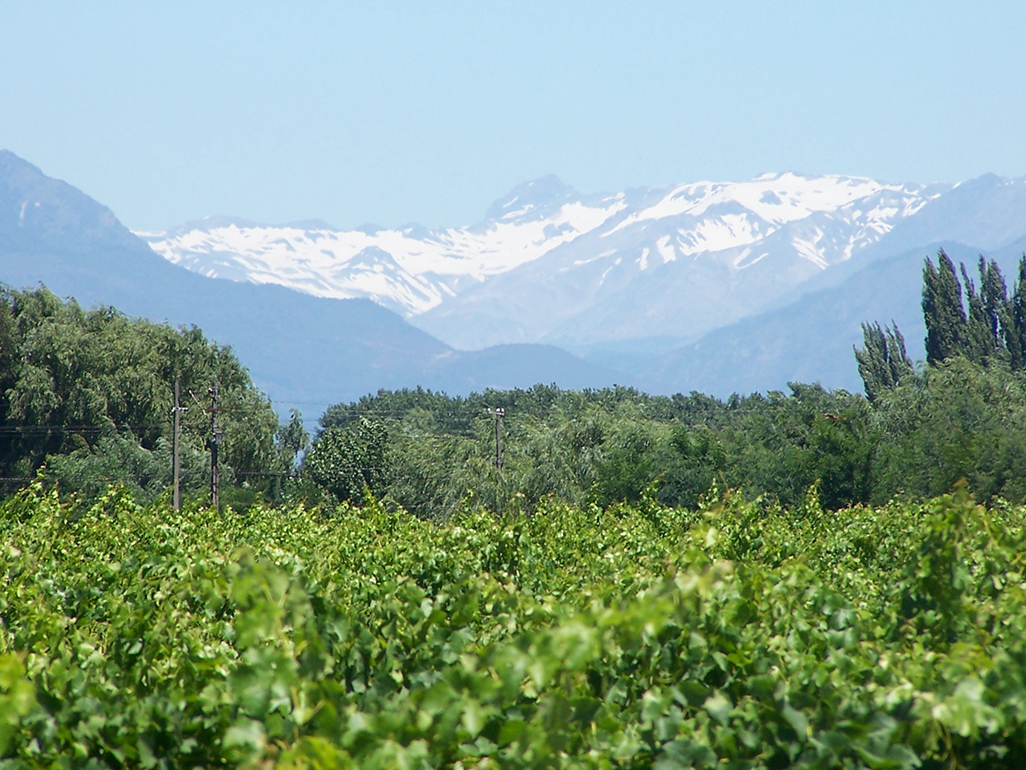 Fancy a Wine tour of the Chilean Central Valley?

The Central Valley is Chile’s most famous wine-growing region. Situated between the Andes and the Pacific, enjoy not only great wines and food, but also stunning views all the way! This short self-drive itinerary explores the Colchagua Valley, which is close to Santiago. Combine with a short trip to the coastal resort town of Pichilemu, known for its water sports activities.

The geographical origins of the vine is still a matter of debate. Various wild varieties can be found in different parts of the world, far beyond the Mediterranean. When the Vikings first arrived in the Americas, they called it ‘Vinland’ for the many wild grape varieties they found there. The type now under cultivation in Europe seems to have originated in Georgia. Under the influence of Greek and Roman expansion, it steadily spread west and north from there. Today grape production is prolific in all warm, temperate regions of the world, from Central and Southern Europe, Northern Africa, Asia Minor, US, Chile, Argentina, South Africa, Australia, to New Zealand.

Viticulture is a profitable business, which, however, claims a vast amount of land. Wine lovers may appreciate the variety of tastes and textures this diversity produces, but environmentally it is a disaster. Relying almost entirely on just one single cash crop is highly risky. Furthermore, monocultures heavily depend on fertilizers, and pesticides that are highly damaging to the environment. 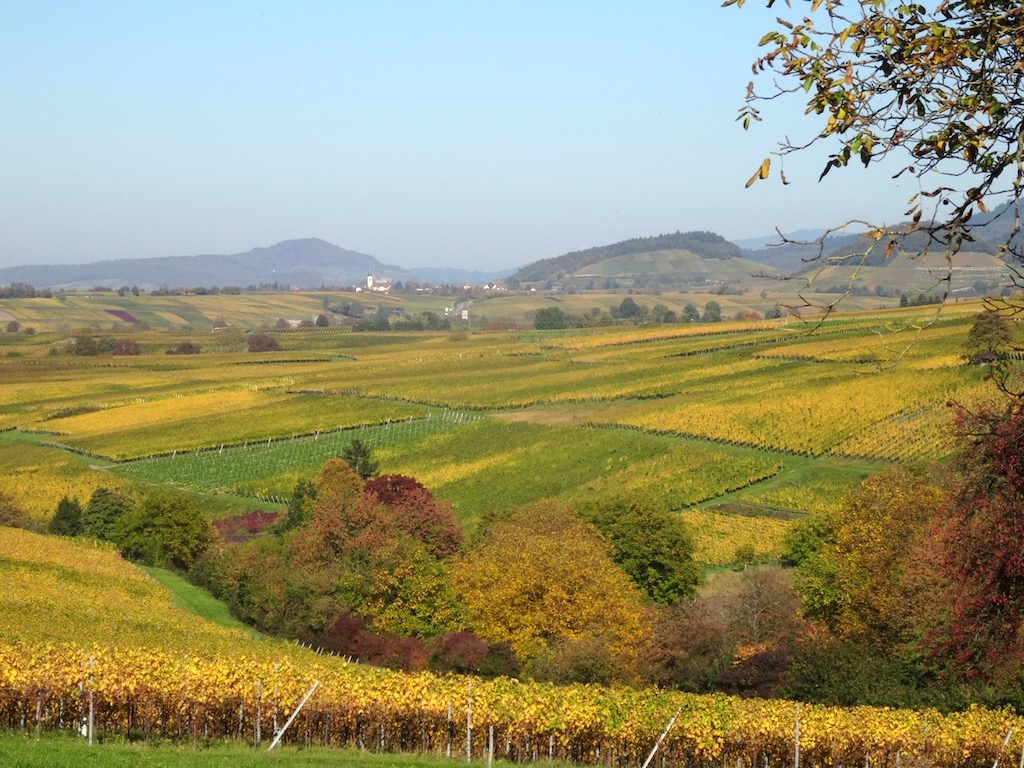 The story of viticulture is so old that nobody really knows where and when it all started. The Bible mentions that Noah planted a vineyard, but even he was probably not the first. Wine is mentioned in almost every classical text, with records dating back some 6000 years.
It appears as though the Greeks were the first to popularize fermented grape juice, with the Romans soon following suit. As major trading powers, they spread the art of viticulture all around the Mediterranean Basin. By 600 BC, wine was a sought-after export commodity, especially popular with the Gauls who, in time, became expert growers themselves.
However, in the latter half of the 18th century, tragedy struck. By then, grapes had moved to the Americas along with the colonists. The drama unfolded when a North American grower sent some specimen of his rootstocks back to the old world for further study. Unfortunately, the sample he sent was infested with a devastating blight (phylloxera vastatrix) that threatened to wipe out vineyards across Southern Europe. It was a catastrophe of unprecedented proportions.
Luckily, the cure also came from North America – and just in time. A frantic search for a blight-resistant yielded results, and another sample was sent to Europe. Growers started quickly grafted their ancient varieties onto American rootstocks, which saved them. Although the industry took some time to recover, European wine-growers rank again at the top of the international charts.

The wines of Ancient Greece seemed to have been quite a different kind of brew than what we are used to today. Historical records describe a much thicker and heavier beverage that had to be diluted at a ratio of 1:3 for consumption. Typically, it was infused with other substances such as resins, aromatic herbs and even psychotropic plants. It is not surprising then that the Greeks associated wine with Dionysus, the wild, shamanic god of ecstasy. His rites were frenzied and orgiastic. A menacing mob of Maenads, (his priestesses) pursued the god (or his representative) in a feverish hunt and tore him apart. Eventually, an animal (a fawn or fox) replaced the human sacrifice. In time, Dionysus was tamed and re-cast as a chubby, cheerful, but domesticated deity of wheat and wine. The animal sacrifice was replaced with a ritual sharing of ceremonial bread and unadulterated wine during the annual celebration of the Elysian Mystery play.

The Romans equated Dionysus with Bacchus, their god of wine and intoxication, whom they worshipped in much the same manner. In Egyptian mythology, Osiris is the Lord of wine, and Isis fell pregnant with Horus after eating his grapes.

The Hellenized Syrian satirist Lucian recounts a ‘tall satirical tale’ in his ‘True History’. A strange vineyard once grew on the far banks of a river that ran with wine instead of water. The grapevines grew woody stems, but their upper parts sprouted beautiful maidens whose hair was a tangle of leaves and bunches of grapes growing from their fingertips. Their enchanting song lured passers-by. But woe to those who succumbed to their embrace: instantly drunk and unable to escape, the hapless took root and soon sprouted shoots and leaves themselves.

Wine is a divine gift of the gods. In moderate amounts, it lifts the spirit, exhilarates and inspires. It opens the mind and holds the key to the heart and soul. Innumerable works of art have been inspired, and countless adventures started by a spark of its passionate fire. But in excessive quantities, it stupefies and causes delusion. It is a fine line between ecstasy and frenzied oblivion. 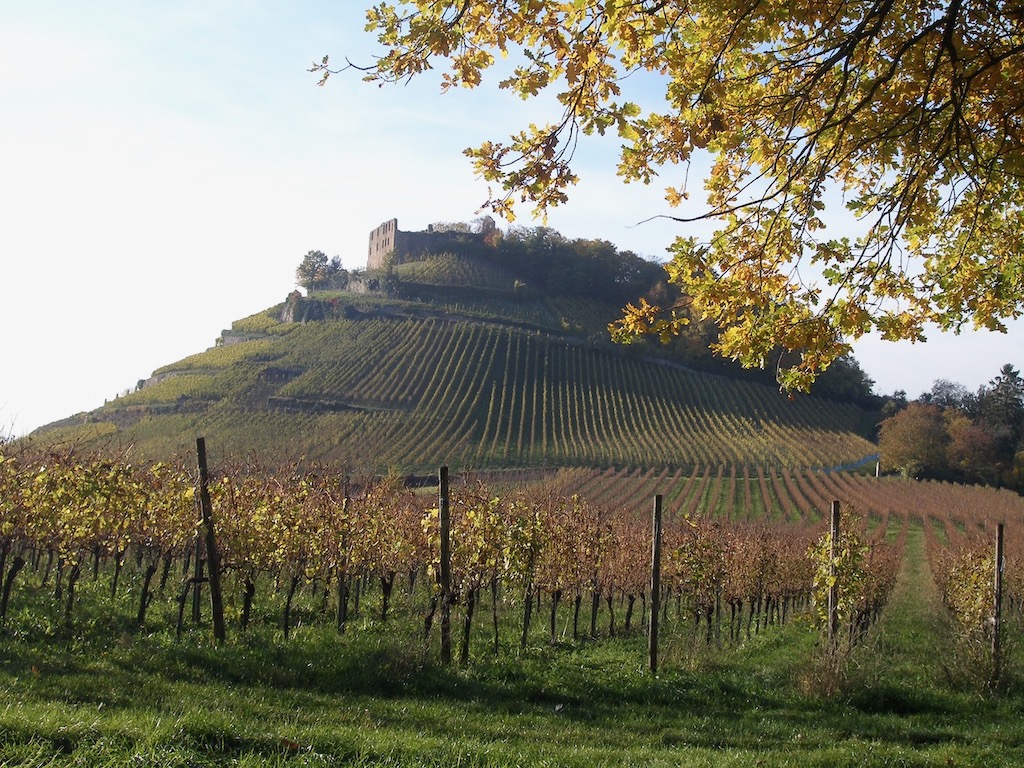 Both red and white wine was traditionally used as a solvent to extract other substances when making medicinal wines and cordials. But various parts of the plant itself were also used as medicine.

The flowers appear in May/June. The leaves should be picked in spring when they are tender, and the grapes ripen from September onwards (in the Northern Hemisphere).

Constituents:
In the summer, the leaves contain a mixture of sugar and glucose, tartaric acid, potassium bi-tartrate, quercetin, quercitrin, tannin, Amidon, malic acid, gum, inosite, a crystallizable fermentable sugar and oxalate of calcium. In the autumn, they contain more
quercetin and less quercitrin.
Actions:
Anti-inflammatory, astringent, styptic
Indications:
An infusion of 1 TSP of fresh, finely cut leaves per cup of water helps with conditions such as rheumatism, gout, nausea and spitting of blood. A preparation known as ‘Papinorum Extract’ made from the leaves is used in Homeopathy to treat epilepsy and inflammatory conditions of the hip. Dried and powdered, leaves were fed to cattle as a treatment for dysentery. A decoction was used to prevent a threatened miscarriage. The astringent properties help to arrest internal and external bleeding, cholera, dropsy, diarrhoea and nausea. The decoction can also be used to treat mouth ulcers and as a douche for vaginal discharge. Grape leaves are used as a treatment for varicose veins and fragile capillaries. For this purpose, leaves are harvested as soon as they turn red and are used either fresh or dried.

Actions:
Nerve tonic
Indications:
1tsp of dried flowers per cup of boiling water is said to strengthen neuronal dendrons. It also supports the bone marrow to build red blood cells. The infusion can be used internally or applied externally as a rub to aid neuronal function (even for numbness of the lower limbs)

Constituents:
Malic, tartaric, ascetic ascorbic and racemic acids, alanine, alpha-linolenic acid, alpha-tocopherol, arginine. Oxalic acid in unripe fruits, Ca, P, Fe, thiamine, riboflavin, niacin, and ascorbic acid
Actions:
Fortifying blood tonic, nourishing, stimulates kidney and liver function and thus aids elimination and inner cleansing, gentle laxative
Indications:
A grape-fast is a popular method to rid the body of accumulated metabolic waste products and other toxins. 2 kg of grapes should be eaten throughout the day for two weeks, with little or no other food. It is recommended to do a full day fast one day before embarking on this regime. This is an excellent way to stimulate and tone the kidneys and thus to lose weight by releasing water from the tissues. It reduces fat, regulates bowel function, purifies the blood and cleanses the skin. A grape-fast can alleviate rheumatic pain and heartburn, regulate metabolic processes, water retention, oedema and circulatory complaints. Grapes are restorative and nourishing food that aid recovery from anaemia and debilitating conditions. Dehydrated grapes (raisins) have demulcent, nutritious and slightly laxative properties. Grape sugar (fructose) is rapidly absorbed into the bloodstream. It almost instantly restores energy levels in case of exhaustion and debility.
Contraindications:
A grape fast is not recommended for dyspeptic, excitable, hot-blooded individuals, as it may cause palpitations.

Grapevine sap, a watery substance that naturally occurs when pruning the vines, was used as a lotion to treat weak eyes and corneal floaters. It has also been used as a skin lotion. Internally, it acts as a diuretic. 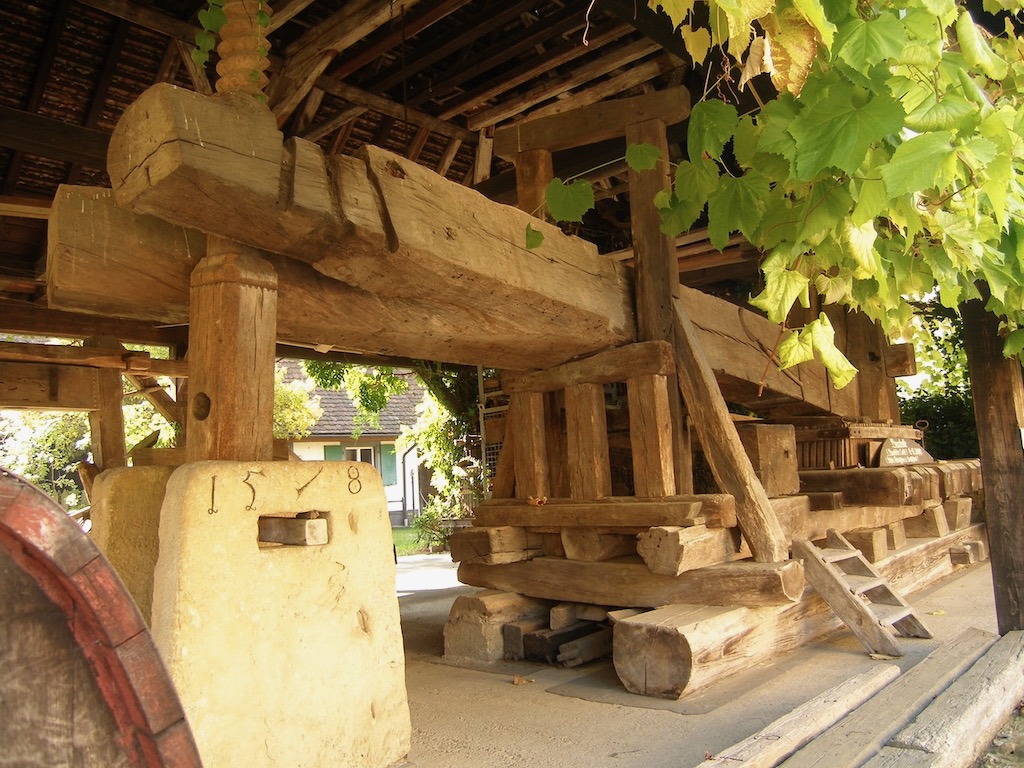